Is Jim Thome Really All That?

One day after tyng Mikey Mantle for career home runs, one has to wonder just how good of a player Jim Thome is…

Unless you’re Mark McGwire, being a member of the 500 Home Run Club makes you a surefire Hall of Famer.  But does Jim Thome really belong alongside baseball’s greatest players?

Taking his other offensive stats into consideration:

For a player that is known to be a huge offensive threat, these numbers are not so impressive that he should be compared to Hall Of Fame caliber talent.  Thome has had a nice 18 year career and if healthy for 3-4 more years could easily eclipse 600 career home runs.  But does that stat alone garner validation for his HOF status?

The designated hitter has never bothered me as it has been a part of the game now for decades.  But considering that 1/4 of Thome’s games have been at the DH and he has never done anything special as a defender, I count that as a negative regarding his HOF status.

At no time, has Thome been a league MVP.  His highest finish was 4th back in 2003.  And to only have 5 All-Star appearances during 18 seasons says that their is comparable or better talent than Thome in the league for 13 out of his 18 years.

Your thoughts??  Is Thome a Hall of Famer today?  And if not, if he passes 600 career home runs before he retires does that change your mind at all?

I just love this card!!!

In my opinion, this was the first Fleer product that stood out.  Too bad it took them 7 tries before this issue…  The borders are nice and bold, yet don’t overpower the player photo, the print, or the logos.  This is one of the only sets in which the player image overlaps the border and it doesn’t look cheesy to me.

Oh, and Greg Maddux ended up being a pretty good pitcher too… 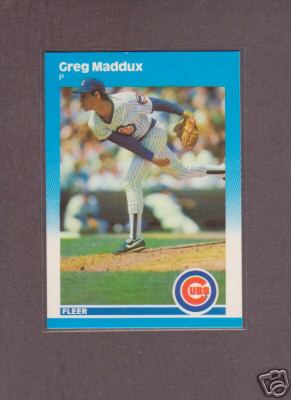