These 2 cards are #20 and #21 for my Billy Williams collection.  Both of these cards from the 1971 set commemorate what Billy Williams, Johnny Bench, and Tony Perez did in the National League during the 1970 baseball season.  To have 3 players rank in the Top 3 in both home runs and RBI’s shows just how dominant that these 3 Hall of Famers were in 1970. 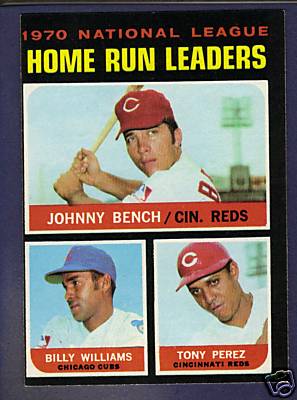 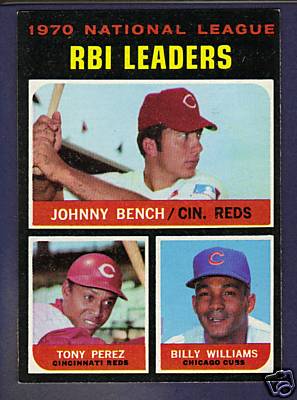 Jeff Gordon Gets Boooed By The Chicago Cubs Fans…

They don’t let him get past the 4th line before they’re ripping him!!!

Manny Ramirez Has Been Remarkable!!!

I get what people say when they criticize Manny Ramirez for what he says and how he acts off the field.  Truth be told, some of sports greatest superstars have been noted as being crazy, egotistic, and for lack of a better word assholes.  Manny Ramirez is grouped into this team of players for his antics and joins guys like Dennis Rodman, Barry Bonds, and Terrell Owens.

But the bottom line is if you wouldn’t want to add a player of this caliber to your team than your goal is not winning.  All of these guys are incredible athletes and each of them are among the best in their sport.

Just look at what Manny Ramirez has done since joining the Dodgers…  Not only did he assist them in taking over 1st place in their division to make the playoffs, but he took them from being 4 games out of first place.

In 53 regular season games with the Dodgers, Manny batted an amazing .396 while hitting 17 home runs and driving in 53 runs.  Who wouldn’t want to add a player like that to their line-up?  In fact, Manny may be the best trade deadline pick-up of all-time.

So here is the question I pose to you.  Of all of the players in the major leagues today, who could have stepped in and done the same or better than what Manny has done in LA??  How many others have this kind of talent and ability to contribute at this level??

Go ahead….  Try to find someone…

After posting this blog last week about Rafael Palmeiro I was curious to see how the hobby has reacted to his fall from grace.

As I noted before, I was a big fan of Raffy’s and consider him to be one of the most complete offensive players from the 1980’s and 1990’s.

Posted in Chicago Cubs, Stars from the 80's