What Ever Happened To Will Clark???

Will ‘The Thrill’ Clark was an offensive machine during his playing days.  As a college baseball player and member of the USA Olympic baseball team, Clark earned a reputation for having one of the sweetest swings in baseball.

In Will’s first major league at-bat, he homered off Nolan Ryan.  How many players can claim that incredible feat?  As a member of the San Fransisco Giants from 1986-1993, Clark became one of baseball’s best overall players as he earned four Top 5 finishes for MVP over a 8 year span.  Being a solid contact and power hitter, Clark became an All-Star too as he earned 6 roster spots on the All-Star team.

In 2006, Clark was inducted into College Baseball’s Hall of Fame.  Today, he works in the front office with the Arizona Diamondbacks organization. 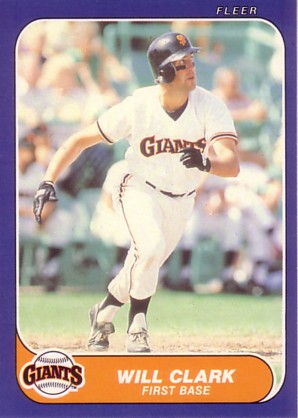 This is the 16th card in my Fergie Jenkins collection.  Again, I am only counting the cards that were issued during Fergie’s playing days.

I love this card.  And to have 2 of the most dominany pitchers from the 1970’s on the card along with Fergie Jenkins only adds to the appeal that this card has to me.

I know that the card is not centered well, but I am finding that this was a big problem with the 1971 set.  I opted to go for a card with the perfect gloss finish and sharp corners…  2/3 ain’t bad!!

This game was my 2nd Chicago White Sox game at the original Comiskey Park.

This was just the 4th game of the 1990 season, so the batting averages for these guys is based on roughly 10-12 at bats.

The White Sox tested Sammy Sosa as their leadoff hitter in 1990.  It’s kind of funny to look back and think of Sammy as a contact hitter and base stealing player now after his 600+ home run career.