This game was big thrill for me.  The Oakland A’s had been to 2 straight World Series – winning 1 and losing 1.  To be able to see a team in it’s prime was extremely exciting.  Adding to that, their roster featured some of my favorite players – Rickey Henderson, Carney Lansford, Mark McGwire, and Terry Steinbach.

There was no bigger highlight than watching Rickey Henderson hit a home run!!! 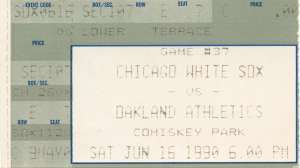