Jose Canseco was one of my favorite baseball players when I was growing up.  There was nobody more exciting to watch as he had the rare ability to hit monstrous home runs and steal bases with ease.  Watching him become the first player in baseball history to reach the 40/40 mark was incredible and the next season he followed that up with a win in the World Series.  Canseco was well on his way to baseball immortality!!!

The first ever ‘Money’ card I ever purchased was his 1986 Donruss Rated Rookie card.  I paid $11 for this card.  At the time, $11 was a lot of money for a 13-year old kid especially when I could have bought 22 packs of cards for the same amount of cash.  But it was certainly worth it as a player of Jose’s caliber does not come around often and I was enjoying being able to witness his greatness.

Today, Canseco is nothing short of the biggest laughing stock in all of sports.  I cannot remember any instances in which a player held in such high regard during his playing days is ridiculed now on a daily basis.  Maybe OJ Simpson???  Jose’s desire to remain in the spotlight and feel the roar of the crowd again must be so strong inside of his soul as he has put himself into situations strictly to get his name in the media.

Below is a list of Jose’s wacky adventures from just the last few years.  I am sure that I am missing some; but he’s a hard guy to keep track of…

Look, there are a ton of former athletes that struggle with the loss of their fame once they retire from professional sports.  Being held in such high regard by peers and fans would be a huge ego-boost for all of us.  But there is a right way and a wrong way to handle yourself when your career is over.  Look at all of the guys that have done it right…  Emmit Smith became a sports commentator and hit mainstream America while dancing on television.  Jerry Rice too, and now Warren Sapp.  Howie Long has done movies and is a huge part of Sunday NFL broadcasts.  If Canseco had done it right, he could have easily put himself into a position like these guys have.  Who wouldn’t want to hear from one of baseball’s heroes from the 80’s and 90’s while watching a game?

Look, I love Jose Canseco the baseball player.  He is quite possibly one of the most talented players to play this game in the last 20 to 30 years.  And when my sons are older I will tell them stories about him the way that my dad told me stories about Mickey Mantle.  I’ll just leave out all of the after-baseball years…

Unfortunately, Jose Canseco has not done too much right since leaving a sport he claims to love.  It will only be a matter of time before we see this again….

Another great Reggie Jackson card – this time from the 1984 Topps set.  This card is similar to the 1983 issue with the 2 images, but this time the action photo is the star of the show.  Maybe if Reggie was wearing his Ray-Ban sunglasses in the cameo shot my opinion would differ… 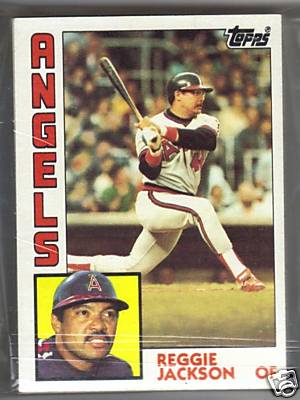 This was my first experience seeing the Red Sox live.  Wade Boggs was my favorite player at the time, and I was extremely excited to finally get to see him play in person.  In addition to Boggs, I was also a fan of Ellis Burks and Mike Greenwell.  I thought that the Red Sox had the talent to compete each year for a title, but unfortunately that did not work out.  At the time, Wade Boggs was the ultimate contact hitter but you would never think that he would be used as a lead-off hitter, but that is exactly what Boston did.  He even stole a base in this game – it was his first of the season and only steal of the year!!!

For the White Sox, their roster was full of talented young players as well as veterans that could still get the job done.  Led by Carlton Fisk and Tim Raines, the team had a roster full of future stars like Sammy Sosa, Frank Thomas, Robin Ventura, and Ozzie Guillen.