I wanted to go to this game for 1 reason – Deion Sanders.  I found Deion to be an ‘electric’ kind of player.  A player that makes you want to go to the ballpark to see him live.  Although Deion was not the most talented player on the field, his style and personality were unmatched and even in a visiting stadium, he was a crowd favorite.  In this game I recall him hitting a triple.  A triple that would have been a double for 99% of the league, but Deion had some serious wheels and really ran the base paths well.

For the Marlins, they were still a few seasons away from their 1997 World Series title, but their roster was full of players with an awful lot of potential.  Led by Gary Sheffield’s incredible talent, this roster included Charles Johnson, Jeff Conine, Terry Pendleton, and Chuck Carr.

Unfortunately this game did not live up to what I had hoped for, primarily because my Marlins only managed 2 hits in the entire game.  But, for me I was still more than pleased as I was able to see ‘Prime Time’ live in person. 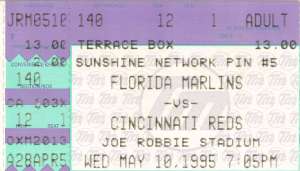 I love these kinds of cards.  Maybe not as much as the League Leaders that commemorate a player’s individual performances, but these team leader cards are a great way to represent and display the best that each team has to offer.

Adding these 2 cards is getting me very close to having all of Fergie’s cards from the 1980’s!!!