What Was It About Pedro Martinez???

I cannot pinpoint 1 specific reason as to why I never cared for Pedro Martinez.  All professional athletes come across as being overly confident and rightfully so as they are the best of the best at their profession.  But Pedro has always rubbed me the wrong way.  At one time he was considered to be a Top 5 pitcher in the game, but he still carries himself in the same manner today when he hasn’t played like ‘that guy’ in years.

The first 14 years of Pedro’s career were nothing short of spectacular.  In 14 seasons, Pedro won 3 Cy Young awards, and finished twice 2 more times.  He also recorded double-digit victory totals in 12 of these 14 seasons.  Statistically speaking, Pedro could be classified as a dominant picther.  You have to be immensely talented to have a career win-loss record of 214-99.  But in the last 3 seasons, Martinez has accumulated just 17 wins.  And the man that was striking out 200-300 batters per season for much of his career has only struck out 119 batters in 25 games over the last 2 years.

If Pedro Martinez retired 2 seasons ago, many would have tagged him as one of the best pitchers to have played in the last 20 years.  But his refusal to leave the game when he was no longer able to compete at a high level over the course of a full season is going to turn this 1-time Hall of Fame caliber player into just another player that stayed in the sport too long.

I don’t know if Pedro is concerned about picking up 86 more victories to give him the 300 wins milestone that defines pitching greatness, but I do know without a doubt that he is very interested in pickup up fourteen million $1 bills next year…   see you in ’09 Pedro!!!

Andre doesn’t look too happy in this picture.  Cards and photos like this amaze me.  I am sure that I am not the only collector out there that would balk at buying this card back in 1989.  I mean, of all of the great pictures of Dawson in a Chicago Cubs uniform why would Fleer make this their choice???  Hmmmm…. very puzzling indeed!!!

I sent this card out to Mark Grace back in late August with my first round of autograph attempts through the mail.  73 days later I am proud to say that ‘Amazing Grace’ is back home!!!

It looks like this card really took a beating though.  The autograph looks great, but there are dings on all of the card’s corners and there is even a very large crease to the left of Grace’s helmet.  The envelope I received this card back in appeared to be in great shape so I was pretty surprised by the condition of the card upon ripping the envelope open.

Either way, I am really happy to have a signed card by one of my Cubs of all-time…  Thanks Gracey!!! 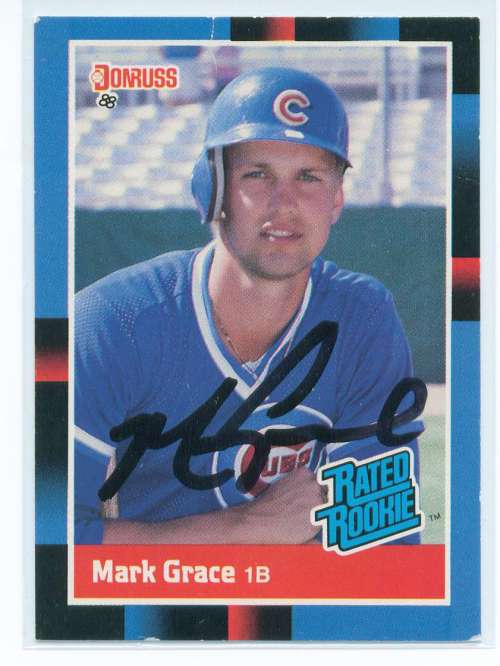 Posted in Autographs, Chicago Cubs, Stars from the 80's