We’re Going To The Florida Marlins Fan Fest This Weekend!!!

I’m pretty excited that the baseball season is around the corner.  And what better way to get ready than to attend your favorite team’s Fan Fest, right??

We went to the Fan Fest last year for the first time.  All-in-all it was a lot of fun.  My son was only 1 1/2 at the time so we kind of just wheeled him around the stadium for a few hours.  We did get to go on the ‘backstage’ tour which included trips to the Executive offices, dugout, locker rooms, batting cages, and more.  I am hoping we get there early enough again this season to do the same.  Now with 2 young kids, a 2 1/2 year old and 6-month old, we will still be restricted as to what we can do and see but that shouldn’t stop us from having quite a bit of fun again either.

If all goes according to plan, we get to go on the tour, have a few pictures taken of us with some players, get a few autographs, and maybe pick up a few freebies along the way!!!

I’m also considering printing up flyers to hype up ’30-Year Old Cardboard’ as there is no other place to find fans of the ‘home team’ than at the ballpark!!

Expect a full report on Monday with pictures galore!!!

I don’t know if I could find another baseball player I would rather have on my team during his prime than Pete Rose.  The effort that he put out during each and every play, whether at bat or in the field, is so rare among today’s players.

Rose is certainly one of the greatest hitters and competitors in baseball history.  I think what I like most about this card is the perfect 20 season difference in the pictures of Pete.  The joy on his face during his early years in 1963 versus the hardened, more serious look 20 years later in 1983. 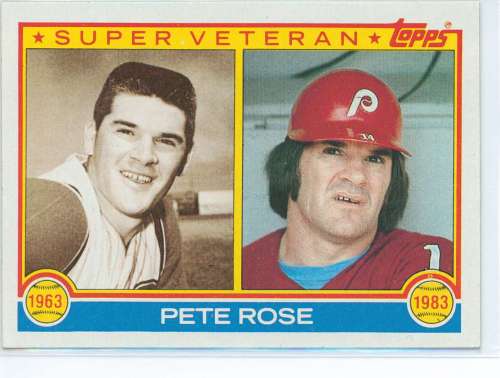 Posted in 1983 Topps Super Veterans Subset, Stars from the 80's

I received 4 packs of 2007 Topps Series 2 in the contest I won on the Autographed Cards blog.

Here are the results from Pack #4

This was the best pack of the 4 in my opinion.  2 future HOF players in Griffey and Glavine.  A Liriano All-Star Rookie card, and that Bill Hall design is Super!!!

Plain and simple, I just really like this card.  It’s a re-do version of the 1987 Topps card, which could be classified as a re-do version of the 1962 Topps card.  Of the many ‘posed’ photos used by card companies during the 1980’s this is probably one of my favorites.  It’s kind of on the ‘little league’ side with the one knee, bat stuck under the cocked elbow pose, but it works.