I am going to break this review into a few sections so I can comment on them without having the appearance of a long-winded, rambling post…

This is the second FanFest that I have attended.  In comparison to last year, we had much greater access to the players this time around and the ‘on the field’ experience was an added bonus.  Last year the entire event was held outside of the stadium and you were only able to get inside if you signed up for the tour, which we luckily did.  This year the only way to get inside of the stadium was with a VIP pass that were only given to season ticket holders and corporate sponsors.  So, we did not get to tour the locker room, clubhouse, executive offices, like we did last year but being on the field was pretty neat.

Mario, of Wax Heaven fame, and I have been trying to get together for a few months now.  We live roughly 30 minutes apart but due to varying schedules just never got a concrete time to hang out and talk baseball and blogs.  Since we both knew we would be at the event we made plans to meet and I was quickly greeted by Mario when we arrived.  His spot on line was about 250 people ahead of me, but it was great to finally meet in person and exchange pleasantries.  We also held a little gift exchange too – Mario had a ton of Marlins cards for me to use for possible autographs as well as a stack of wonderful Andre Dawson cards.  I gave Mario a team postcard that I was able to pick up during a Marlins’  caravan tour stop earlier in the week.  It was signed by Alfredo Amezaga, Ryan Tucker, Cameron Maybin, John Baker, Gaby Sanchez, and Jack McKeon.

My wife and I ran into Mario and Tatianna 5-6 times during the 2 hours we were at the festival.  The scene was quite chaotic, but we were able to quickly exchange stories and point to different locations inside the stadium that different events were taking place.  Each time we saw one another they would show off the bat they were carrying around and I would show them any additions to my Marlins team helmet.

*A funny story…  As my wife and I were a heading to the line outside the stadium prior to entry, Mario yells my name.  We exchange greetings and handshakes and then he and my wife give each other odd looks.  After a few seconds of dialogue, they realize that they went to middle school together.  Pretty neat, huh???

It’s a small world after all….

I firmly believe that these kinds of events are for kids and loyal fans.  Unfortunately with that comes the greedy collector and rude bunch that will do anything to capture the signature of a third-string utility outfielder.  But the Marlins actually did a pretty good job of organizing their autograph pavilion.  I don’t care for the long lines so I didn’t take part, but if your goal was to get signatures of your favorite players, the Marlins made that very possible for you.

For me, with my wife and 2 young sons with me, the option was just not that attractive…

Last year, my wife and I found ourselves standing next to the local sports radio station’s booth as they were broadcasting live.  Luis Gonzalez stood right next to us as he waited to go on air.  I was completely unprepared for this, so we just made small talk, shook hands, and I welcomed him to South Florida.

This year was different.  As soon as we saw the length of the lines for the autograph tents, I suggested we headed to the radio booth to scope it out.

Boy, was that the right decision:.  I was able to get signatures of Jeff Conine, Dan Uggla, Josh Johnson, Rick VandenKirk, and Wes Helms in a relatively short amount of time just by hanging out by the booth.  I was able to do this with relative ease and now my Marlins team helmet stands at 16 total signatures. 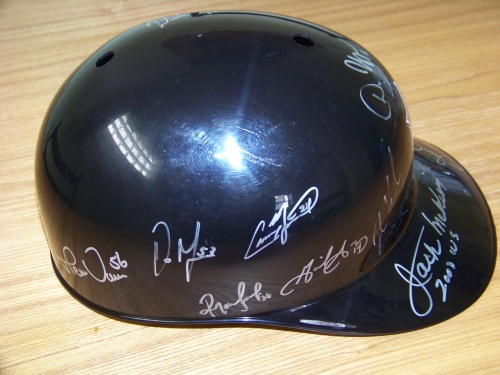 If you wanted to meet a player on the Marlins your odds were extremely good.  All you had to do was look around as they were all over the field and very warm to the crowd.

I was able to get 2 photo opportunities with 2 very popular Marlins players: 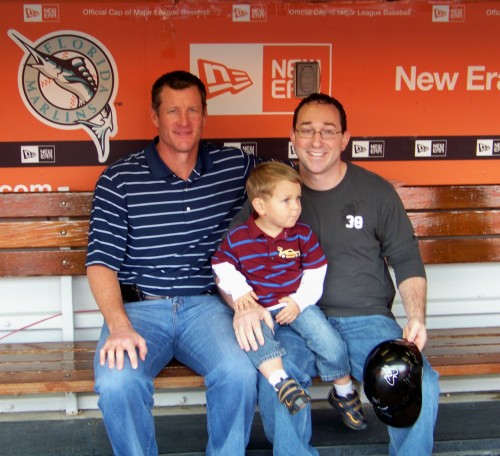 All in all, the event was a blast.  Although I only got to be there for 2 hours, I was able to enjoy all of the on-the-field activities that I desired.  Could I have stayed longer?  Yes.  Did I have enough?  Yes.

Spring Training is right around the corner and I cannot wait!!!