I bought this team set on a whim as I try to avoid most modern card releases.  I’ve got a strong case of baseball fever right now and cannot wait for the Florida Marlins to take the field this season.  The team has not made any major roster additions this off-season, but they have a very solid and young nucleus of players that if they gel and play good team baseball they can easily play .500 ball or better.  If players like Cameron Maybin, John Baker, and Gaby Sanchez can impact the team’s offense in a positive way the Marlins should be able to score a ton of runs which should really help out their incredible starting pitchers.

The cards look great.  I like the ’09 Topps design and hope to use many of these cards for autograph requests through the mail and at a few Spring Training games too.

Here are the cards: 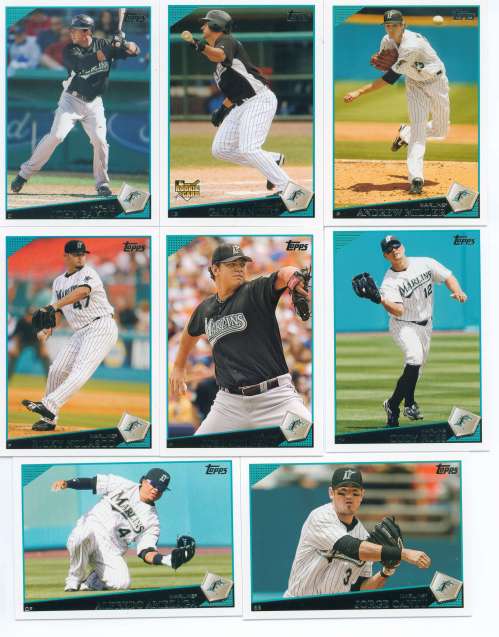 If there is 1 card in the 1983 Topps Super Veteran set that sticks out like a sore thumb, I believe it is the Dave LaRoche card.  Nothing against Mr. LaRoche, but he is the only player from this subset that I have never heard of prior to seeing this card.  And to classify him as a ‘Super Veteran’ is a stretch when other amazing pitchers like Nolan Ryan, Tom Seaver, and Steve Carlton are highlighted in the same manner.

The man known as ‘The Penguin’ is turning 61 years old today!!

If I could use 1 word to describe Ron Cey’s baseball abilities it would be = SOLID.  This guy appears to have had no weakness!!!

In his 17-season career, Cey established himself as a good hitter for average and power with the ability to drive in runs.  I think that one of the greatest factors of this was that Cey played with the same players for half of his career.  As a member of the LA Dodgers in the 1970’s Cey was on an infield line-up that player together for 8 straight seasons.  By the end, they were a well-oiled offensive and defensive powerhouse and ended up winning the World Series in 1981 while Cey took home the Series MVP Award.

For Ron Cey’s birthday, I have decided to give him a lighter pair of cleats.  The only thing that Cey was unable to conquer during his career was the art of stealing bases.  Most 3rd baseman are known to be quick with their reflexes, but not fast on their feet.  Maybe it was his shoes, so that is my gift.  During Cey’s career, he stole just 24 bases while being caught stealing 29 times.

Posted in Birthdays & Anniversaries, Chicago Cubs, Stars from the 80's