A true student of the game, Tony Gwynn studied the game with such fire and energy he was bound to succeed.  Gwynn is categorized with the greatest hitters to ever suit up for a major league baseball team.  His hitting was dominant, but Gwynn was more well-rounded that given credit for during his playing days.

Tony Gwynn has won 8 batting titles during his 20 year career as a member of the San Diego Padres.  With a career average of .338, Gwynn mastered his craft and left others behind as he topped the batting charts year after year.  In 20 seasons, the lowest Gwynn batted for a full season was .289(during his rookie season).  For the next 19 years, Gwynn remained above .300.  In his best statistical season in 1994, Gwynn flirted with .400 only to fall 6 points shy and end the year at .394.  Tony Gwynn retired with 3,141 career hits and (5) 200-hit seasons.

Although Gwynn was known as a contact hitter, he did offer a little power at times.  For his career, Gwynn has hit 135 home runs with the highest single-season tally being 17.  He also has 319 stolen bases on his resume along with 1,383 runs scored and 1,138 RBI.

Tony Gwynn is a 15-time All-star.  He has finished in the Top 20 for the MVP award 10 times.   He also won 7 Silver Slugger awards along with 5 Gold Glove trophies.

Gwynn has played in 2 World Series match-ups and lost both.  In 9 career games during World Series play, Gwynn hit .371 as he collected 13 hits.  He has also accounted for 3 runs scored, 3 RBI, and 1 home run during the ‘Fall Classic’. 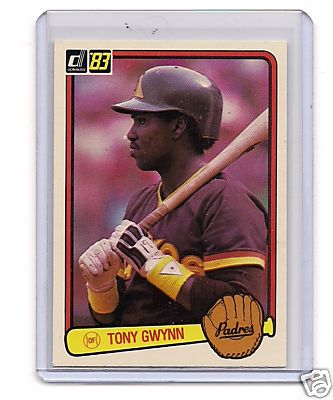