As I alluded to on the previous post, I added 4 more autographs to my Marlins team helmet.  The count now stands at a string 32 players and coaches.

When I set out on this mission, I did not envision this helmet to be a ‘2009 Team’ project but rather a nice way to get a big handful of signatures since I was lacking Marlins cards at the time.  I plan on giving this to my older son when he can enjoy and appreciate it. But until that time I will continue to do my best to add autographs to it as I can.

Here is a picture of the helmet as of today.  As you can see the space is starting to become limited, but I think I can sneak at least another 10-15 autographs on it if I have to… 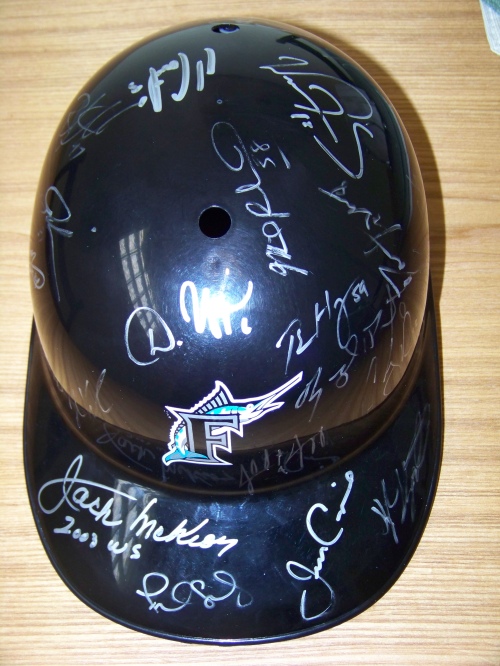 Special ‘Thanks’ go out to Jorge Cantu, Emilio Bonafacio, Leo Nunex, and Renyel Pinto for adding some great autographs to this sweet project!!

Yesterday I attended the Florida Marlins’ final ‘Spring’ event of 2009 as they hosted their fans at Dolphin Stadium to watch their final practice.  The event was an effort by the team to drum up some attention as the count-down to Opening Day has begun.

I took my oldest son with me as we have been playing our version of baseball together at the park recently and every time we drive by a park he says ‘baseball game’.  When I asked if he wanted to go to Miami to watch a baseball game he said ‘Yes’ and that was all of the incentive I needed.

We got there at 2:30 and immediately entered the stadium as there were no lines at the entrance gates.  We made our way up to the 100 level and found 3 lines for autographs.  The players had yet to arrive so I decided to wait until I was sure who would be in each line prior to making my choice.  I did not intend to ‘graph’ this event as long lines and 2 1/2 years don’t mix well but these lines were not bad at all so I waited it out.  The only thing I brought with me was my Marlins team helmet so there are just a few more guys I needed to get this goal closer to completion.  Soon after the 5 players that would be signing showed up and I jumped into the line with Jorge Cantu and Emilio Bonafacio.  The other players that signed were Cameron Maybin, John Baker, and Tony Perez.  The autograph session was only going to last 1/2 hour so I was pleased with what I had obtained and we made our way into the stadium to find some seats and enjoy watching the guys take BP.

The first golf cart had Hall of Famer Tony Perez in the front seat with Emilio Bonafacio in the back.  Riding shotgun in the second golf cart is Jorge Cantu while John Baker and Cameron Maybin sat in the back. 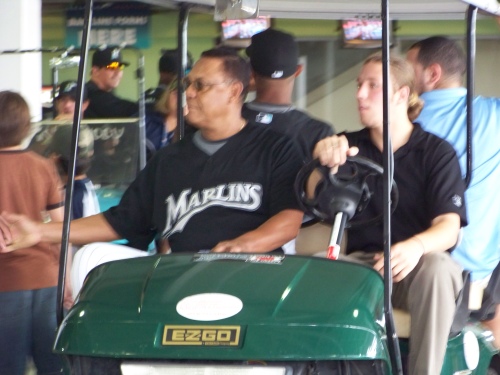 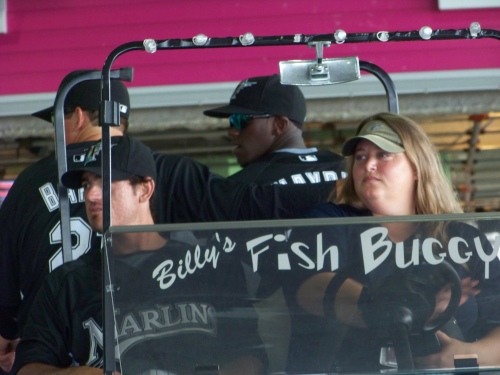 By this time my little boy had fallen asleep, in my arms, so I quietly made my way to row #1 and watched the happenings on the field.  Pretty soon after the players began making their way onto the field and started to stretch and get warmed up.  It was kind of neat to watch them all get on the field individually as we clapped and applauded our favorites.  I gave Andrew Miller a little more of an ovation because Mario from Wax Heaven was unable to attend.  After their quick stretch and long toss, the players took to the field for practice and BP.  By this time my son had awoken from his nap so he was able to sit and enjoy watching the guys hit, catch, and throw.  Several of the players took a few minutes to sign for the fans along the first base side.  I was able to grab 2 more autographs near the bullpen of Renyel Pinto and Leo Nunez. 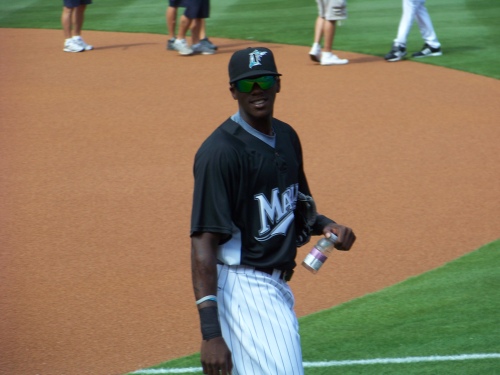 Dan Uggla gets ready to take the field. 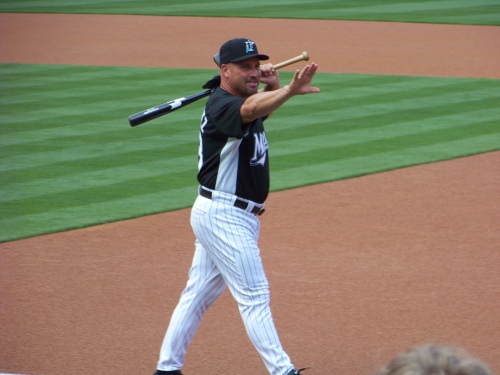 A very small handful of fans wait for HR's during batting practice.

All in all, the day was fun.  I was once again really saddened by the lack of support that South Florida gave to the team.  If I had to guess a number, I would say that there were no more than 5-600 people in attendance for this unique event.  The ticket salespeople and Marketing team for the Marlins do a great job but it seems like no matter how well the team treats it’s fans it is just very hard to get some steam behind ‘the fish’.  As we were leaving I couldn’t help but wonder how many empty seats there would have been for this event had it been the Miami Dolphins and not the Florida Marlins.  Oh, well.  I am ready for Opening Day and I think that once again this team has the opportunity to compete in a very tough division.

We left around 4:45 as BP was still going on.  It was a hot day and my son was asking to go home so I knew it would be best to make our way out. 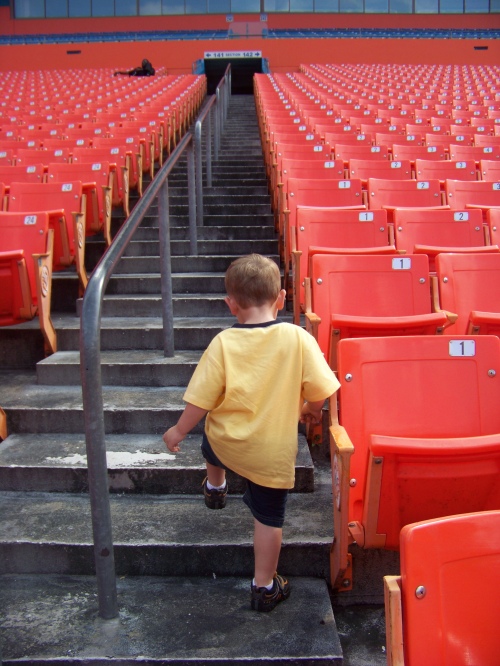 Somewhere in  a city in the United States an umpire just shouted ‘PLAY BALL’!!!  America’s favorite past-time has just started for the 2009 season…

Bert Blyleven may be more famous toady than he was during any time in his playing days.  His Netherlands team has recently finished competing in the World Baseball Classic where they upset one of the teams picked to compete for the championship, the Dominican Republic.

But, Mr. Blyleven has put together an amazing resume and is one of the best pitchers to ever play the game that has not been elected to Cooperstown.  !n 22 seasons, Mr. Blyleven recorded a win-loss record of 287-250.  He threw 242 complete games and 60 shutouts.  He has tallied 3,701 career strikeouts while finishing his career with a 3.31 ERA.  He also has 2 World Series rings from his days with the 1979 Pittsburgh Pirates and 1987 Minnesota Twins teams.

So for his birthday, I am giving Bert my vote for Hall of Fame enshrinement.  Congratulations and Happy Birthday, Mr. Blyleven!!! 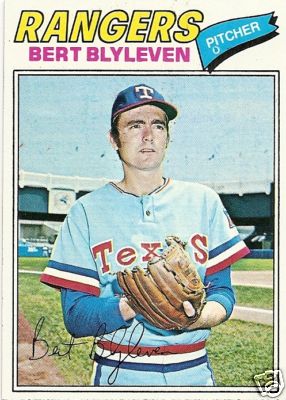 Now that my Andre Dawson player collection is complete I wanted to take the time to show off my favorite 5 cards from this set.

The intensity captured in this picture is what makes this card stand out.  Altough it is rare to find a card of Dawson laughing or smiling, it is equally just as rare to get a card with his portrait that captures ‘The Hawk’ in this very intimidating stare.

The 1981 Donruss design is extremely basic.  But sometimes, less is more, and in this case it works.  There is nothing to distract you from the picture.  And when the Expos players are captured in their Powder-Blue uniforms the cards seem to work very well.  This picture most have been taken during Spring Training as it is not from Olympic Stadium.