15 years ago Michael Jordan made his professional debut as a baseball player.  It’s hard to believe that this was 15 years ago.

While the experiment didn’t quite go according to plan, MJ certainly did give a great effort towards achieving a childhood goal of his.  Many people say that his inability to make it as a professional baseball player tarnished his ‘God-like’ image created through his basketball success.  I have to disagree with this.  In my eyes, I saw a man trying to accomplish a goal that he had as a child.  What’s wrong with that?  He failed, but at least he tried.  How many people even attempt to enter the profession that they wanted to enter as a kid?  My guess is very few.

Although Michael Jordan was unsuccessful in reaching the major leagues, he did bring a lot of attention to minor league baseball.  He was great for the NBA, and he was pretty damn good for MLB too. 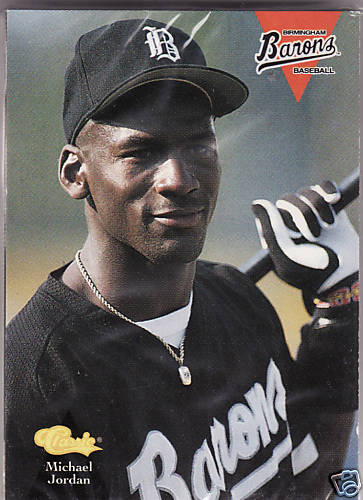