It was a typical night for ‘Mo’ as he entered the ballgame with a 2-run lead in the 9th inning and made quick work of Elijah Dukes, Adam Dunn, and Austin Kearns.

It’s very rare that a single baseball card can capture the essence of a player in the same way that this 1985 Topps Traded Vince Coleman rookie card has done.  Vince was a runner – pure and simple.  This card’s picture captures that perfectly and is by far the greatest card of Vince Coleman to have been produced.

Here is this man who is in obvious top-notch condition doing what he did best.  Arms pumping.  Legs Racing.  Eyes Focused.  Vince Coleman was a base stealing machine for the St. Louis Cardinals and this rookie card is the perfect addition to my collection as it captures exactly why I was a fan of Coleman’s and what I will remember him most for.

To Topps – Congratulations!!!  You nailed this one!!!!

Posted in Stars from the 80's, Vince Coleman Collection

I recently scored 7 Andre Dawson certified autographs off of Ebay for less than $30 delivered.  This is card #5 of the 7.

How about this beauty??  Nice, huh…

Numbered 68/100, this Andre Dawson card is from the 2005 Leaf Limited ‘Trademarks’ set.  While the background design of this card is not terribly impressive, it does allow for the features to stand out.  The muted Montreal Expos logo in the background takes nothing away from the powerful image of Andre.  And ‘The Hawk’s bold signature pops in a contrast to the faded out background art. 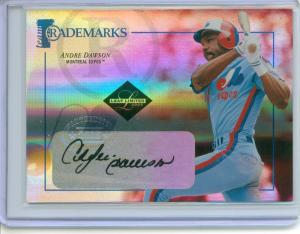 I still think of the 21-year old rookie phenom when I hear Kerry Wood’s name.   The kid that was going to save the Chicago Cubs franchise and make them contenders for the World Series.

Unfortunately, those expectations are too strong for any one player to overcome, especially a 21-year old kid learning how to pitch in the big leagues.  While Wood has had a nice 11-year career, 10 with the Cubbies, he has never quite lived up to the hype bestowed on him – Not that many players could though…

It started in 1998 when in just his fifth game in the big leagues Kerry Wood struck out 20 batters.  An amazing accomplishment by any pitcher, this performance drew comparisons to some of the greatest rookie pitchers of all-time.  Wood wound end winning the Rookie of the Year award that season and has built a nice, solid career for himself since.

What I would like to give to Kerry for his birthday is the same success he had during his rookie season.  Skip the injuries, skip the moves in and out of the bullpen.  I want to see what someone with Wood’s success as a rookie could do for the length of a career.  The start was Hall of Fame worthy, it would have been nice to see that success continue!