Playing for the Minnesota Twins and at home for this game, Winfield went 2-for-5 as the team’s designated hitter.

Hit #3,000 was a single hit in the bottom of the 7th inning against Athletic’s hurler Kelly Downs.

What I find most notable about this accomplishment is that Dave Winfield was primarily known as a power hitter during his playing days.  A man of his size was the home run hitter, not the contact guy.  But Winfield’s rare ability to combine both power and contact hitting put him on par with the best guys from both categories!!!

On this day in 1996, Paul Molitor collected the 3,000th hit of his major league career.

On the road playing the Kansas City Royals, Molitor and his Twins teammates took the field in front of 16,000+ fans at Kaufman Stadium.

For the game, Molitor went 3-for-4 hitting 2 singles and a triple.

Of the 3 hits he collected over the course of the game, #3000 was the triple he hit in the top of the 5th inning off of Jose Rosado.

Currently, Molitor ranks 9th in total hits in a major league career with 3,319 total hits.  It appears that Molitor’s space in the Top 10 of all-time is secure for quite some time!!

One of the scrappiest and most entertaining players to debut during the 1980’s, Tim Raines was magical on a baseball field.

I don’t know if it was because he was undersized(5 feet, 8 inches tall), but Tim Raines dominated baseball games to most people’s surprise.

Raines had a knack for contact hitting and he retired with a .294 lifetime average alongside 2,605 hits.  And on the base paths he was a monster.  One of the sport’s greatest runners, Raines has 808 career stolen bases and he has also scored 1,571 runs.

A constant threat to win the league’s MVP award and a 7-time All-star, Tim Raines was a steady contributor to each of the 7 teams he played with during his 23-year career.

Yet, Tim Raines is still a player that is hardly collected in today’s hobby.  And he is rarely celebrated in baseball.  Much of this has to do with his best years as a professional be ing played in Montreal for the Expos.  And while I don’t want to take away anything from his days playing North of the border, I thought for his birthday I could add an element to that experience that he and the other Expos players deserved….  For Raines’ birthday, I would like to transplant the most loyal and die-hard fans in all of baseball to Montreal to cheer for the Expos.  I’m taking the people of St. Louis and sending them North.  If any fans in this sport can get behind a team and a player like Raines, I think he would be a much more celebrated player today!!! 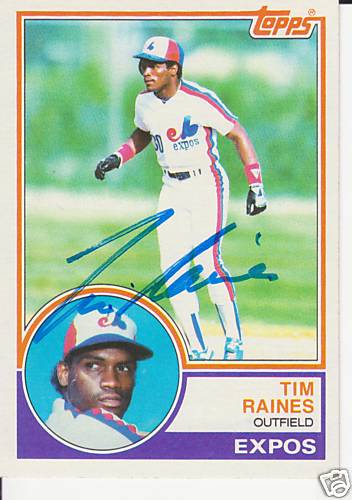 It is amazing to think that today Orel Hershiser is 51 years old today!!!  It makes me feel older just thinking about it…

Hershiser will be remembered most for his outstanding 1988 season.  With 23 wins, 15 complete games, and a Gold Glove award, he was the unanimous choice for the National League’s Cy Young award.  Orel led the Los Angeles Dodgers into the playoffs that season as well.  In the National League championship series, Hershiser pitched in 4 of the 7 games and earned the NLCS MVP award.  In the World Series against the heavily favored Oakland Athletics, Hershiser again dominated 2 games and won the World Series MVP award.

His most notable individual accomplishment may be the 59 straight innings pitched without giving up a single run during the 1988 season.  This record still stands today and should remain in tact for quite some time.

Hershiser enjoyed some success after leaving the Dodgers in 1994.  He was a big part of the Cleveland Indians pitching crew that took the Indians to the 1997 World Series.  But for me, and many others, Orel Hershiser will always be remembered as a LA Dodger.  And in the last year of his career in the majors, 2000, Orel returned to LA but was nowhere near as effective as he was during his first stint with the club.

So, for his birthday I would like to give Mr. Hershiser a “do-over” for the 2000 season.  One more crack at reliving the glory of his winning years with the team.  One more chance to hear the roar of 40,000+ dedicated Dodger fans as he takes the mound for the team.  He deserves this!!! 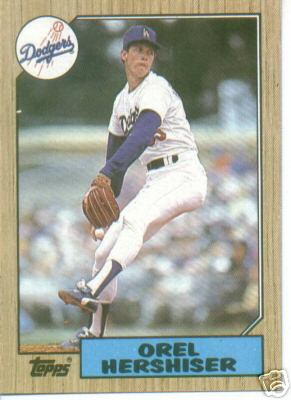