Ah, the circle of life is completed.  The 5th and final card of this subset brings us back to where it all started and ended, Oakland.  Reggie debuted with the A’s in 1968 and finished his amazing career there in 1987.

At the age of 41, Reggie was still able to produce solid numbers as he played in 115 games during his final year.  While his batting average was a pretty low .220, he still managed to thrill fans as he smacked 15 home runs and collected 43 RBI.  And just to prove that he still had his wheels, Reggie stole 2 bases in his final season too. 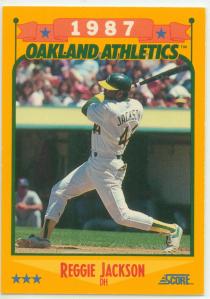