This card celebrates the incredible seasons that both Jim Palmer and Tom Seaver had during the 1973 major league baseball season.

Each player led their leagues in ERA.  Palmer led the American League with a low 2.39.  And not to be outdone, Tom Seaver led the National League and the majors with a mighty impressive 2.08.

Two of the best pitchers from the 1970’s on one baseball card.  And a perfect addition to my Jim Palmer player collection!!! 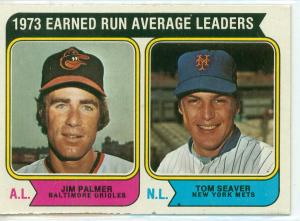 Oh, and just to close the circle, each of these great pitchers won the Cy Young award in their respective leagues that year.  For Palmer, it was his first of three.  And for ‘Tom Terrific’, it was his second of three awards.