My Next Andre Dawson Autograph Request Is In The Mail!!!

I wanted to work on a few more signed cards for my ‘Inscription Set’.  So, on my way to work this morning, I dropped this little package off at the Post Office.

Bt my estimation, I am 1/2 way through this special set of signed Andre Dawson cards.  And when I get these bad boys back from ‘The Hawk’ I will be that much closer to completion!!

Stay tuned as I hope to bring you the results very soon!!!

**And a special ‘Thank You’ to everyone that helped me select the ’91 UD card as the one for the ‘438 Home Runs’ inscription!!

Former Chicago Cubs manager, Don Zimmer, returned all 4 cards I sent to him in just 7 days!!  And all 4 were signed too…

This was the third time I tried to get Zimmer’s autograph in the last 16 months.   The first attempt is still somewhere in the mail stream somewhere.  The second try is sitting in someone’s office in the Tampa Bay Rays organization, and now this 3rd attempt is home safe with me.  And I am thrilled!!!

Zimmer was the manager of the Cubs when I moved to Chicago back in ’89.  That team went on to win the pennant that year and it was fun to watch Zim celebrate his team’s success.  I have very fond memories of that squad, and they are one of my favorite rosters of all-time.

Thank you Coach Zimmer.  You have made this Cubs fan very proud!!!

’84 Donruss – I don’t love it or hate it.  But I do have strong memories of this being one of the very first packs of cards I ever opened as a kid.  So for that reason, I like the set.

And it’s nice to pick up the Jim Palmer card from that set so I can check one more card off of my ‘Needs List’.

1984 was Palmer’s last year in the majors.  Only appearing in 5 games, and going 0-3, Palmer retired from the sport and the game he loved.  He finished his amazing 19-season career with the Orioles having a 268-152 record.  Palmer is the proud owner of 3 Cy Young Awards, 3 World Series titles, and was a member of the 1990 Hall of Fame class!!! 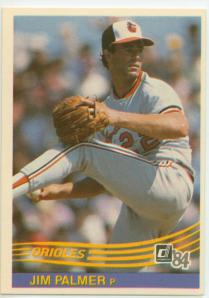 Posted in Jim Palmer Collection, Stars from the 80's 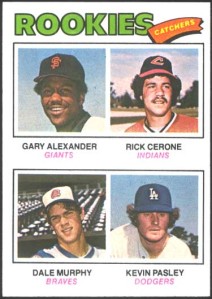 Gary Alexander – A 7-year veteran that played for 4 major league teams, Alexander was used primarily in the utility role over the course of his playing days.  While spending time at catcher, first base, all 3 outfield positions, and DH, Alexander was unable to secure a full-time position.  He had a monster year in 1978 as a member of both the Oakland A’s and Cleveland Indians.  In ’78, he crushed 27 home runs while collecting 84 RBI.  He also led the league in strikeouts in that season with 166.

Rick Cerone – With 18 years as a big leaguer under his belt, Rick Cerone enjoyed a full career.  A solid catcher, Cerone was able to amass some pretty decent numbers on offense.  With 998 career hits alongside 190 doubles and 59 homers, Cerone was a nice addition to roster in what was known as a ‘weak-hitting’ position.  During his best season, 1980, Cerone finished in 7th place for the MVP award.  In that year, he hit .277 with 30 doubles, 14 home runs, and 85 RBI.

Dale Murphy – The cornerstone of the Atlanta Braves team throughout the 1980’s, Dale Murphy was one of the best players of that decade.  A resume that boasts 2 MVP awards, 7 All-star teams, 5 Gold Gloves, and 4 Silver Slugger awards, Murphy was a great example of a ‘5-Tool Player’.  Never classified as a power hitter, Murphy crushed 332 home runs from 1980-1990.

Kevin Pasley – With a brief career that only lasted 55 games, Pasley was never able to earn a full-time role as a catcher in the league.  Defensively, he was fine.  But on offense, he was unable to find his groove and he retired from the sport with just 31 career hits and 1 home run.