It took just 14 days for this nicely signed card of baseball hero Bobby Thomson to be returned back to me!!

Thomson is best known for his ‘Shot Heard Around The World’ and that is what this 2000 Topps Golden Moments card celebrates.

In 1951, the Los Angeles Dodgers and the New York Giants played a 3-game series to determine what team would advance on in the playoffs.  With the series tied at 1-game apiece, Thomson’s home run in Game 3 was the game winner and is widely recognized as one of the greatest home runs in baseball history.

Thank you Mr. Thomson for signing this card and making this incredible baseball moment a little more special for me!! 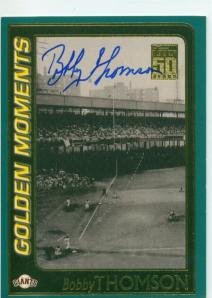 Just another card of the great Greg Maddux doing what he did best!!

The 1991 Donruss design is nice, nothing extra special but not too bland either.  The bold, Blue, border(BBB) color works well with the Cubs’ team colors.  And while I can do without all of the multi-colored, multi-sized, multi-shaped designs on the perimeter of the card, they are not that big of a distraction.

A rather boring attempt by Donruss in my opinion.  Lucky for them that this great photo of Maddux on the hill at Wrigley Field gives them a little wiggle room!!!

One more card in my Greg Maddux collection – YES!

Bill Singer – Singer, a 2-time All-Star and 14-year veteran, had a solid career as a starting pitcher.  With 308 starts to his credit, Singer finished his playing days with a 118-127 record alongside 94 complete games.  He compiled a 3.39 ERA while also tallying 1,515 strikeouts.  Playing for 14 years and with 6 different teams, Singer never made it to the post-season.

Don Sutton – Hall of Famer Don Sutton started 756 major league games over the course of 23 seasons.  With a record of 324-256, Sutton took his teams to the post-season often.  Sutton played in 4 World Series contests; losing all 4 times.  He is a 4-time All-Star and finished in the Top 5 in the Cy Young Award voting five consecutive years from 1972-1976.