Andre Dawson 2001 Topps – ‘Who Would Have Thought’

A very cool design option that never grows old – Before & After.

In 2001, Topps put the pedal to the metal regarding sets and subsets.  This one is titled ‘Who Would Have Thought’ and it features 2 images of Andre Dawson – 1 from his days playing in Montreal and the other from his time with the Cubs.

I love the card’s concept but I personally would have chosen 2 photos that were better linked.  Still though – great job by Topps on this one!!! 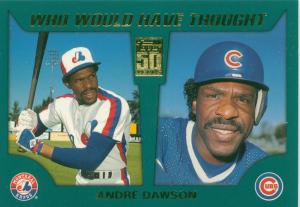