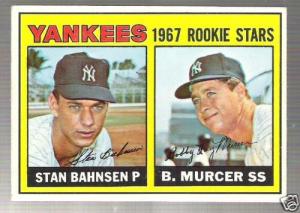 Bobby Murcer – A 5-time All-star, Bobby Murcer enjoyed 17 seasons in the big leagues in which he played for three of the sport’s most historic franchises – Yankees, Cubs, and Giants.  During the early 1970’s Murcer enjoyed great success as a Yankee and finished in the Top 9 for the league MVP award in three straight seasons.  Murcer has a career .277 batting average along with his 1,862 hits.  Murcer crushed 252 home runs, while also capturing 127 stolen bases and scoring 972 runs.

This is currently the oldest Jim Palmer base card I own.  And it looks pretty good too!!!

Now 40 years old, the 1970 Topps design is rather boring with its very neutral grey border.  But the dull border makes the bold Orange of the Orioles name as well as the highlights on Palmer’s uniform really stand out.

This picture was obviously taken during Spring Training as the background is not from a major league ballpark.

The 1970 baseball season was a good one for Palmer.  It was his first of eight 20-win seasons.  He went 20-10 and finished the season with 17 complete games and a 2.71 ERA.  1970 was the first time Palmer earned an All-star selection and he also placed in 5th for the American League Cy Young Award.

I am thrilled to add this great card to my collection!!!

Posted in Jim Palmer Collection, Stars from the 80's

McCovey is a legend in the San Francisco area and around the world of baseball.  His Hall of Fame resume includes 521 home runs, the 1959 Rookie of the Year award, the 1969 Most Valuable Player award, and 6 appearances in the All-Star game.

So, what do you give a player of this stature for his birthday?  How about a chance to hit a home run into the body of water named after him- ‘McCovey Cove’??  Something tells me if he got the right pitch to hit, he could still get ahold of one…