With the acqusition of this card, I have completed my Eddie Murray player collection.

For this set, the goal was very clear – Collect every major brand release from Eddie’s first stint with the Orioles.  The years covered are 1978 through 1989 and the set is comprised of 42 different cards.

Here is a look at the full collection: 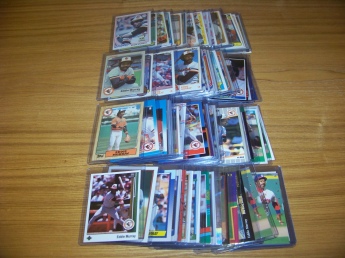 Am I done collecting Eddie Murray baseball cards?  No, not by a long shot.  But now that my original goal has been accomplished, I can move on.  And by moving on, I will go after some of his modern cards that feature him in his O’s uni!!!

Eddie Murray is one of the game’s greatest offensive players.  And I am thrilled that I was able to honor him, his career, and his baseball cards accordingly.  My player collection may be done, but my love for collecting and paying tribute to Eddie is far from over.

Stay tuned next week as I bring you my ‘Eddie Murray Fab 5’ showcasing my favorite 5 cards from this newly completed set!!!  Thanks.

Posted in Eddie Murray Collection, Stars from the 80's

9 fast days was all it took to get these cards back from Tom Brunansky!  ‘Bruno’ was one of my favorite players on a roster of Twins that captured the hearts of baseball fans in the late 1980’s and into the 90’s.  He also went on to play on some very talented rosters of the Boston Red Sox and St. Louis Cardinals.

I have to say that Bruno’s signature is one the best I have received so far.  The script is perfect and his name can be made out very clearly.  I am thrilled to add these to my growing autograph collection.

Andre Dawson Will Be Enshrined At Cooperstown Wearing A Montreal Expos Hat!!!

Andre Dawson Will Be Enshrined At Cooperstown Wearing A Montreal Expos Hat!!!

It was announced on Wednesday morning that ‘The Hawk’ would wear the hat of his longest tenured team on his Hall of Fame plaque.

Ultimately, it doesn’t matter to me.  Just having Andre in the Hall of Fame is enough for me.  He had brilliant years in Montreal and Chicago, so the decision of the Expos hat is not a terrible one.  While I was more of a fan of his days in Chicago, I was introduced to him when he was an Expo and was quickly drawn to him there.

I have two issues with this decision:

1 – Andre won’t get to celebrate this with his fans in Montreal in the stadium at which he planted his Hall of Fame roots.  The Expos franchise is gone and major league baseball has done a good job of wiping them from our memory.   Montreal’s team moved to Washington DC and became the Nationals.  The players were the same(for the most part) but all evidence of the Expos was washed away.  That included their history, their stats, and the 4 jerseys that the Expos retired – Dawson’s was among them.

2 – Andre wanted to go in as a Cub.  He deserves a say in this decision doesn’t he?  Even more than that, he deserves to stand in front of the fans at Wrigley to hear them roar for him again.  He deserves to walk into right field one more time to watch his jersey get raised on the right field pole.  Andre deserves this and the Cubs and city of Chicago need this!

I cannot wait for July 26 to come around – it is going to be a fantastic day!!! 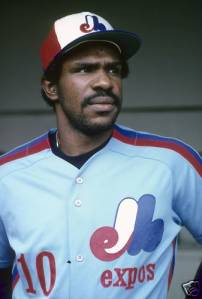 Oh, and another positive of Andre going into the Hall as an Expo is that we’ll be seeing more of that great logo and Powder-Blue that we’ve been missing all these years!!!