Way back during my first week of blogging I wrote an article titled ‘Gary Carter Does NOT Belong In The Hall Of Fame’.  Just a few days into blogging, this post was my most viewed and commented upon post since I started ’30-YOC’ just a few days earlier.

Here I sit, some 17 months later, and my thoughts have changed quite a bit.  As my love for the sport and its stars from the 1970’s and 1980’s has grown during this time, I have to admit that I was wrong about Gary Carter.  And with Andre Dawson’s recent election to Cooperstown still a constant thought on my mind, I feel more strongly than ever that Carter is without a doubt Hall of Fame material.

Why have I turned the corner on this?  Here is my new way of thinking.  (1) You cannot compare players from different eras to one another.  It’s not fair to compare Carter to Johnny Bench.  They are different players with different success stories – Bench’s just happen to be the best!  (2) When looking at a player, you need to compare him to his current competition.  And with that said, Carter was more often than not, the best catcher in the league for a majority of his career.  He delivered potent offense and superb leadership as the catcher and leader of the pitching staffs that he caught.

When looking at the greatest catchers of all-time, Carter certainly ranks in the Top 6 spots(probably at 4).  And during his playing days, he held down the #1 spot regularly.  Now when I look at other players playing in today’s game and I try to rank them amongst their peers, many do not crack a spot anywhere near the Top 10.  Potential Hall of Famers like Gary Sheffield, Jim Thome, Vlad Guererro, these guys are not making any all-decade teams.  While their careers are impressive by statistical standards, they cannot hold a candle to what guys like Manny Ramirez, Albert Pujols, and Ichiro Suzuki have accomplished.

To Mr. Carter – As I stated 17 long months ago, I am a fan and I enjoyed watching you play for the Expos and Mets during my youth.  Today, at 34, I appreciate what you meant to the game more now than ever before!!

Posted in Gary Carter Collection, Stars from the 80's

The premier of Upper Deck in 1989 gave us some great new photography to enjoy.  Their images were superior in comparison to what the other brands were releasing at the time.  And while I am a sucker for a full-body action photo, I find this card to be one of the few ‘close-ups’ that the card companies tend to force onto us.

But since I have little desire to talk about Darryl and his winning smile, I will review his 1989 baseball season for you…

In ’89, ‘Straw’ made another All-star team, his 6th straight appearance.  But his numbers were not up to the lofty standards that he set in previous years.  With a very low batting average of .225, Strawberry was not himself.  His power numbers were still solid, with 29 home runs, but they declined sharply from previous seasons.  And his ability to drive in runs in opportune times also faltered.  With just 77 RBI, Darryl was 20-30 RBI behind the pace he set in his previous 5 years.

1989 was Strawberry’s second to last season with the New York Mets.  And I firmly believe that his output during that ’89 campaign is the biggest part of the reason that he and the Mets spilt up just 1 year later.

Posted in Darryl Strawberry Collection, Stars from the 80's

In the early days of baseball, runners could be called out by hitting them with the ball! 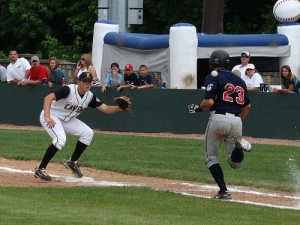