While this 1973 Topps card of Reginald Martinez Jackson is not going to win any awards for design or photography, it is his 5th year card.  And for being 37 years old, the card looks great with just slight corner wear.

1973 was the year that Reggie won his Most Valuable Player award.  And although he would finish in the Top 10 for the award 6 other times, 1973 was when he was able to grab the plaque.  During that year, Reggie hit .293 while smashing 32 home runs, driving in 117, and scoring 99 runs.  His MVP efforts helped lead the A’s into the playoffs and eventually to the World Series championship!! 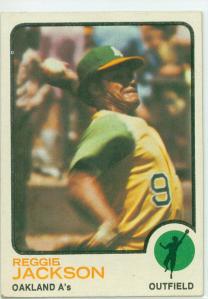 When I made my ‘New Years’ collecting goals, I declared that  I wanted to add a little more vintage stuff to my collection – This certainly takes care of that!!!!

The Story – At home in Veteran’s Stadium, it took Steve Carlton just 134 minutes to dominate and beat the Montreal Expos.  In front of 30,142 die-hard Phillies fans, Steve Carlton joined the 3,000 Strikeouts Club.  On the day, Carlton threw a complete game en route to his 4th victory of the early season.  He struck out 9 batters in this effort. 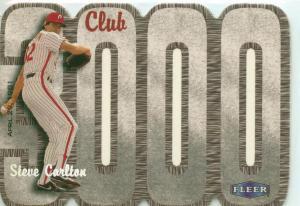 Tommy John – John, the winningest pitcher in baseball history to not be inducted in the Hall of Fame, finished his 26-year career with 288 wins.  A 4-time All-star, and a Top 8 finisher for the Cy Young award 4 times during his career, Tommy John was a solid performer.  Yet while he enjoyed more than a quarter of a decade in the major leagues, Tommy John was often overshadowed by his contemporaries.  In his career, John started 700 games, completing 162 of them including 46 shutouts.

If I held a March Madness kind of tournament to name my favorite modern-era Andre Dawson baseball card, this one would be a #1 seed.

With colors that compliment the Cubs’ theme to a tee, this card screams Chicago Cubs baseball.  The retro uniform Andre is wearing along with the knee-high socks he’s wearing look great.  The flags flying across the top of the card remind me of good old Wrigley Field, and that is a wonderful thing!!  Lastly, the Gold lettering and logo work that Donruss added to this card really add a nice sense of royalty to the card.

What do you think?  Can this card take the prize??