On this day in 1969 Mickey Mantle retired from the game of baseball.  A legendary player that spent his entire career in New York as a member of the Yankees, ‘The Mick’ was as iconic of a figure in sports as there was.

The funny thing was that Mantle replaced the great Joe DiMaggio when DiMaggio retired from the game.  The fans did not accept him right away as they missed ‘Joey D’ and thought that he could never be replaced.

I will not argue as to which player was the better of the 2, but what I will say is that when Mantle retired after his 18 seasons as a Yankee his numbers were incredible.  With his .298 career average sitting alongside 536 home runs and 1,509 RBI, Mantle solidified his annual All-Star status.  Although his numbers dropped off significantly towards the end of his career, he still managed to be a fan favorite in the Bronx. 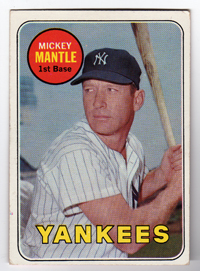