Tom Hall’s career as a Cincinnati Reds player spanned 4 years, from 1972-75.  A pitcher that was used in both starting and relief efforts, Hall was a nice player to have on a pitching staff because he was able to absorb innings, whether long or short.

Hall was able to watch and be part of the building of ‘The Big Red Machine’.  Unfortunately for him, he did not get to share in their joy of winning 2 World Series championships.  Hall was traded to the Mets at the beginning of the 1975 baseball season. 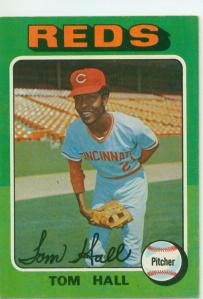