In just under 100 days(97 to be exact), Kelly Gruber returned his 1989 Topps card to me with his autograph neatly applied.

I enjoyed watching Gruber play third base back during the 1980’s.  A third baseman myself, Gruber was a great teacher of how to stay in front of the ball.  Of all of the third baseman I watched regularly during my Little League days, I always thought that he was among the best at knocking the ball down and keeping it in front of him – a lesson coaches would drill into my head for years!

A 10-year veteran, Gruber was a 2-time All-star and member of the 1992 World Series Champion Toronto Blue Jays.  During his best season in the majors, 1990, Gruber finished in 4th place for the AL MVP while also winning the Gold Glove and Silver Slugger awards.

Thank you for the great autograph Mr. Gruber!! 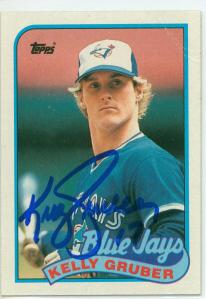