Ok, so here is the deal.  It’s not news any longer, but Roy Halladay is now the ace of the Philadelphia Phillies pitching staff.

But for me, a die-hard Florida Marlins fan, I am at a critical impasse.  You see, Roy Halladay is and has been my favorite non-Marlins pitcher for the better part of a decade.  And now he is playing for the team we fall to every year.  And all he does is make them better.  I have no doubt in my mind that securing Halladay gives the Phillies an incredible shot at winning the NL East, again.  And as much as I would like to see the Marlins challenge them for the top spot, I know that we are still a few key players away from making it a real competition for division supremacy.

But back to Halladay…  What do I do now that he’s wearing a Phillies hat??  ‘My team’ will face him now, probably 3-4 times a season.  Before, I was able to watch him from afar and cheer for him as he beat the AL silly.  But now that he is in the NL and playing for the team that my Marlins need to conquer, I am stumped…

Cheer the guy on and hope he gets a no-decision when he battles ‘The Fish’??  Root for him to dominate the NL the same way he whipped on the AL for the last 12 years??  Start to hope for his demise??

Knew that NFL HOFer Bobby Bell and MLB HOFer Rollie Fingers would be there. And I need Bell on a few GLACs and Fingers on a book. Also had heard that George Bell, who won the 1987 MVP while playing for the Toronto Blue Jays, might attend. After that, I would get everyone else on white sheets. Sat idle for probably 90 minutes, seeing only Nat Moore and Mark Duper and I didn’t care about either. Finally decided to look at name tags on the golf carts and noticed that Lawrence Taylor was scheduled to play in the tournament, in addition to Sterling Sharpe, Fred Williams (the actor) and Richard Roundtree of “Shaft” fame.

I got a little dizzy when I looked over my shoulder and saw LT get in a golf cart. I wasn’t expecting to see him and didn’t really have anything for him. On top of that, I was one of only two graphers at the event. But as soon as I got Sharpe (1/1 whitesheet) a Doral security guard walked over and told me that I’d have to leave if I wasn’t a guest of the hotel.

Sure was a long way to drive for one graph. But the day wasn’t over.

John Lannan: 1/1 (’09 Ginter), 1/1 (’09 Ginter with help)
Andrew Miller: 7/7
Ivan Rodriguez: 1/1 (SI), 1/1 (’08 Ginter)…stopped to sign on the way to his car. said he would do 1-per for everyone if we lined up. The mag was done in silver Sharpie and didn’t turn out too great. I told Pudge as much and he signed another item, albeit reluctantly
Dave Collins: 1/1 (card)..said he was in a hurry
Jeff Conine: 1/1 (bobblehead)..signed the brim…glad i finally got it done because i was getting tired of carrying it around
Jake Smolinski: 2/2
Kyle Skipworth: 1/1 (pic with)
Blake Brewer: 1/1 (pic with)…Read a Baseball America article that said Brewer had a lot of potential so I decided to get my picture taken with him last year…Finally was able to get it signed
Hanley Ramirez: 0/1 ..he actually stopped to sign while walking from the clubhouse to his car. Then he stopped to sign again, this time while in his car. But he got mobbed both times
Chris Volstad: 0/1…it looked like Ricky Nolasco was taking Volstad on a ride in his new car….not sure what happened to Volstad but all of a sudden he has stopped signing
Cameron Maybin: 0/1…tried to get his attention but he wouldn’t stop his car
Chris Coghlan: 1/1 (SS, ROMLB) …again refused to inscribe “ROY”

If you would to contact Mark, he can be reached at psugator02@yahoo.com.

Molitor looks larger than life in this photo.  Not a big man,  by the sport’s standards, the photographer that took this shot must have been on one knee.  Standing at just 6 feet tall, Molitor carried a big bat and matched, if not exceeded, what some of the ‘big’ guys did at the plate.

Molitor also made his second All-star team in 1985.

Posted in Paul Molitor Collection, Stars from the 80's

Taking a small break from my ‘Inscription Set’, I still have a few items I would like to get signed by ‘The Hawk’.

Since I don’t want to give it away, let’s just say that I sent a ‘mystery’ box out this morning  to Andre Dawson.

I’ve got my fingers crossed that my items are signed quickly so I can show them off!!! 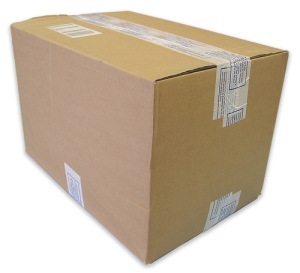 The Story – Cincinnati, Ohio, September 30, 1984:  Astros’ Nolan Ryan finished the season as baseball’s all-time strikeout leader.  The flame-thrower has recorded 3,874 whiffs during his illustrious career, surpassing the total of Phillies’ southpaw Steve Carlton.  The mark has changed hands several times between the two since midway thru 1983 season. 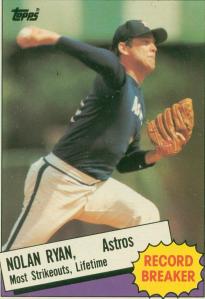 My Added Notes – Ryan finished his amazing career with 5,714 K’s.  Now that Randy Johnson and Roger Clemens(#2 & #3 all-time) are gone from the game it is safe to say that Ryan’s record will remain his for at least the next 20 years.  The current player with the highest mark is 37-year old Pedro Martinez, with 3,154.