Well into the 2010 baseball season, it is great to still get mail from Spring Training.  TTM return #9 comes from Minnesota Twins closer, Joe Nathan.

Out with an injury that will likely keep him sidelined for the duration of the 2010 season, it is nice to see that Nathan is doing well enough to maintain his great TTM reputation.  All it took was 68 days for him to return these 2 cards to me – and they are beautifully signed!!!

Nathan is one of my favorite closers in the game today.  The picture of steady and consistent work, Nathan has collected 246 saves over the last 6 seasons, ranging from 36-47 in each of those years.  I just wish my Marlins would employ a closer of his skill level…

Thank you for the great autographs Mr. Nathan.  I wish you a fast and speedy recovery.  See you in 2011!!! 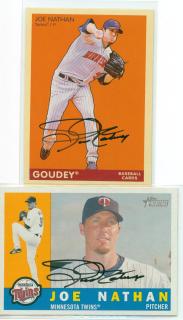 I always liked baseball cards that show pitchers hitting the ball.  Just one of those oddities that I was able to find appealing when it came to photo choices by the companies that dominated baseball cards during my youth.

And here we have Orel Hershiser preparing to bunt on his 1988 Donruss card.  I love the idea, and the work put in to capture this moment.  I just wish the shot was a bit more zoomed out so we could see the full bat and more of Orel’s stance as he squares around in an attempt at laying down his bunt.

We’ll see how many more cards of Hershiser in the batter’s box make it into my collection before it’s wrapped up.  So far the count stands at: 1.

Posted in Orel Hershiser Collection, Stars from the 80's

Hideo Nomo’s two career no-hitters are the only no-hit games pitched at two different ballparks.  The Colorado Rockies moved into hitter-friendly Coors Field for the 1995 season, and the park’s lone no-hit game was played on September 17, 1996, when Nomo struck out eight Rockies and won 9-0.  Baltimore’s Camden Yards opened for the 1992 season and has hosted just one no-hitter, which was on April 4, 2001, when Nomo whiffed 11 batters and beat the Orioles 3-0.

Now that my Fergie Jenkins player collection is complete I wanted to take the time to show off my favorite 5 cards from this set.

I love this card.  I always have!!

The 1967 Topps card is Fergie’s first in a Cubs’ uniform – and it looks great!!  While offering a posed photo, which is not preferred by me, the card design is classic and very reminiscent of cards issued in the late 1960’s.

I was thrilled to add this card to my collection when I picked it up months ago.  And that feeling of personal enjoyment has yet to fade.

1967 Topps – My favorite card that was issued of Ferguson Jenkins during his playing days!

Congratulations to ‘unclemoe’ who correctly guessed that the Atlanta Braves and St. Louis Cardinals would score 36 runs in their 4-game series.

As the winner of this contest, he wins 2 boxes of TriStar Prospects Plus!!!

And he also gets a shameless plug for hosting one of the best autograph collecting blogs out there.  Come see for yourself.

Lastly, a huge ‘THANK YOU’ goes out to AtlantaSportsCards for offering up the prize for this contest.  None of this could have been possible without them.  Thanks again, Josh!!!

Just like the 2010’s Opening Day for the baseball season, the countdown to the Toy Story 3 premier at my house is another highly anticipated event.

And while my generation(the 30-something crowd) missed out on the incredible advances in technology in regards to animation, our kids have benefited greatly from the advancements in film.

Toy Story ranks head and shoulders above all other kid’s films in my household.  My 2 young boys love all of the characters and it is quite odd to not watch both Toy Story 1 and 2 at least once a week.

And if you have yet to see the trailers for the film, don’t worry – ’30-YOC’ has that covered.  Enjoy!

Oh yes, my friends, the countdown has begun.

There are so many reasons as to why this card should be loved by a Greg Maddux fan.  And yet, I am very disappointed in the actual issue itself.  And while I knew what I was getting into prior to clicking my way through the checkout process of buying this one, I admit that I knew it was a mistake before I even started.

And now, why I just can’t stomach it…

The premise of this card issued by Upper Deck is ‘Stars of 89’.  During the 1989 baseball season, Greg Maddux pitched for the Chicago Cubs.  The card obviously features him in an Atlanta Braves uniform.  And the swatch?  Yep, it’s from a Braves jersey too…  Kind of sad, huh??  I want to and will at some point add a relic card of Maddux to my collection that features a relic from his playing days with the Cubs.  I just got sucked into the whole ‘1989’ theme this card had going for it.