I am thrilled to announce that my Fergie Jenkins player collection is now complete.

After obtaining this 1969 Topps card last week, I have each and every card issued by a major brand from Fergie’s playing days.

It took me more than a year and a half to get to the finish line, and I have to say that it was worth every minute.  Fergie Jenkins is my favorite pitcher of all-time, and I feel that I did him and his amazing career justice by honoring him in this manner.

Back when I chose Mr. Jenkins as a player I wanted to go after, I was very ‘green’ to the hobby after taking a 15-year absence.  I started with 0 cards of Fergie, and now I can show tremendous pride in my collection.

So now that this collection is complete, I hope you don’t think for a minute that I am done collecting Mr. Jenkins.  Oh no, not by a long shot.  There are way too many modern cards to go after.  I just get a little more wiggle room now that all of the cards from my ‘Needs’ list have been secured.  There are a ton of certified autographs, game-used relics, and base cards I want to obtain – stay tuned as I will continue to honor Fergie!!

And as I do with all of my finished player collections, next week I will choose my ‘Top 5’ cards from the set and show them off to you one at a time!!!

Was getting a little antsy considering it had been three weeks since I last graphed. I knew tonight would be decent ‘cuz I was graphing a high school kid. I love graphing high school kids because:

1. you usually don’t have to put in a lot of time
2. they are usually very polite
3. they usually do everything you have

Arrived at 6 p.m. and didn’t even have to pay to get in, as I told the woman at the gate that I was simply getting an autograph and would be leaving before the game started. Saw the team stretching in left field and thought that I might have to wait around, which I really detest. Was planning my strategy when I decided to ask the batboy, who must have been 12, if he knew Bryan Radziewski‘s number. Rather than look at a roster or ask a coach, he simply shouted to Bryan, who was in the dugout. “Hey Bryan, what’s your number?” Since Bryan was tonight’s starting pitcher, he was the only player not stretching. I found the whole scenario funny, considering Bryan was only a few feet away the entire time I was talking to the batboy.

The batboy had Bryan come over to me and he promptly signed everything I had. He wasn’t that engaging, but he answered my every question with “Yes, sir” and “No, sir.” I doubt he could’ve been more polite.

I still had time to graph another high-school kid, but the school’s website had the game’s location wrong. So I instead made it to a great sports bar — Rickey’s in Hollywood — in time for the start of the NFL Draft, with Dodgers at Reds on the opposing TV. On a related note, Rickey’s is owned by Billy Mitchell, who has a 2008 Allen and Ginter for setting the Donkey Kong world record. I’ve been in there probably a dozen times but still have yet to see him. 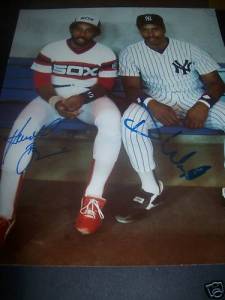 While certainly not the best looking cards from the 1989 Upper Deck set, these cards are very indicative of who was on everybody’s mind during the 1989 baseball season.

In 1988, Orel Hershiser had one of the greatest single-season performances for a pitcher in my lifetime.

Dominant during the regular season, which culminated with him winning the 1988 National League Cy Young Award, Orel took his dominance into the post-season.  And once there, he continued to flourish.  He led his Dodgers past the Mets in the NCLS and in the process won the MVP award for that series.  And when facing the talented A’s in the World Series, Hershiser continued to shine.  He and his Dodger teammates swept the stacked A’s team and Orel landed the World Series MVP trophy.

The three cards below honor Orel Hershiser’s amazing accomplishments from that magical season.  Since these cards were from Upper Deck’s premier issue, I will let their photography choices pass…

On this day in 1954, Henry ‘Hank’ Aaron crushed the first home run of his major league career.

On the road, and playing against the St. Louis Cardinals, Hank Aaron and the Milwaukee Braves battled the Cards in a 4-hour marathon.  In total, the game consisted of 25 hits and 12 runs.

And for Aaron, this game was where his historic start as one of the game’s greatest power hitters took off.  In the top of the 6th inning, Aaron belted a solo homer off of Cardinals’ pitcher Vic Raschi.  On the day, Aaron went 3-for-7, while collecting 2 RBI, scoring 2 runs, and connecting for his first home run as a major league player.