The Story – Just 11 games into the start of the 2000 baseball season, Cal Ripken took center-stage when his Orioles traveled to Minnesota to take on the Twins.  During the game, Ripken collected the 3,000th hit in his amazing career.  On the night, Cal was 3-for-5, with three singles.  Something tells me that the 18,000+ fans that attended the game are still hanging onto those ticket stubs!!

Baseball History – By the end of his career, Ripken amassed 3,184 hits.  Currently sitting in 14th place on the all-time list, Ripken is not often regarded as one of his generation’s greatest hitters, but his numbers would argue that point strongly!! 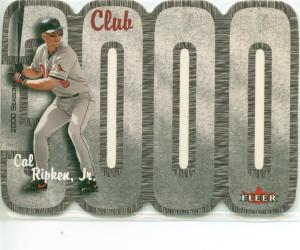