The name of this contest says it all!!!

For this contest, I will be asking the readers to choose a player slated to play in the All-star game that they feel will win the game’s Most Valuable Player award.  It’s really just that simple.

The rules are easy.  Each reader gets to select one player on either the American League roster to National League roster.  Once a player has been selected they cannot be chosen again.  I will close the selections at 11:59 on Monday night so I can publish a final list of the readers participating in this contest and the player they’re pulling for prior to the start of the game Tuesday evening.

Sound like fun?  Then get going and pick your guy.  All you have to do is review these rosters and submit your name and your player’s name into the comments section of this post.

And the winner of this contest will get this: 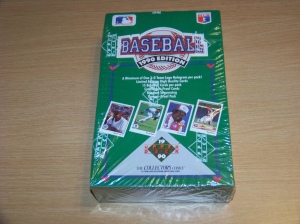 An un-opened box of 1990 Upper Deck baseball cards.  This set contains young stars like Ken Griffey Junior, Mark Grace, Randy Johnson, Bo Jackson, and many others.  And the number of veteran superstars in this set is endless.  Some of them include Cal Ripken Jr, Don Mattingly, Andre Dawson, Roger Clemens, Barry Bonds, and Mike Schmidt.

So get going.  Select your pick and sick back and enjoy the 2010 All-Star game!!!