I can’t get enough of these Game-Used Hall of Fame bargains!!!

In a lot of 6 or 7 cards, I got most of them at the very low price of just $0.99 – and this great looking card of Harmon Killebrew was included.

Simply stated, Harmon Killebrew was a slugger.  When he was at the plate, fans had to pay attention as with a single swing of the bat the ball could be in their lap.  During his Hall of Fame career, Killebrew ‘touchd them all’ a total of 573 times.  His power at the plate brought him 11 All-Star team appearances as well as the AL MVP crown in 1969.

A great addition to my Game-Used Hall of Fame collection!!!

A pretty odd, yet unique, camera angle for this shot.  It reminds me of one of those shots that you see from a basketball game that was taken behind the backboard.

1992 was a solid year for the Hall of Famer.  While collecting 195 hits, Molitor amassed a batting average of .320.  He both scored and drove in 89 runs during that season while also swiping 31 bases.  At 35 years of age, Molitor was playing like a 25-year old – and his incredible patience at the plate led to his striking out just 66 times in 700 plate appearances – good for a .389 on-base percentage!

A great looking addition to my Paul Molitor collection!!!

A seasoned veteran with 24 years of major league experience, Niekro tallied win after win through 3 decades leading up to this historic day.

On the last day of the regular season, Niekro and his New York Yankees team was on the road to take on the Toronto Blue Jays.  44,000+ fans packed the stadium and watched history be made as Niekro earned his 300th victory as the Yankees won the game 8-0.  In the game, he pitched all 9 innings en route to 4-hit shutout. 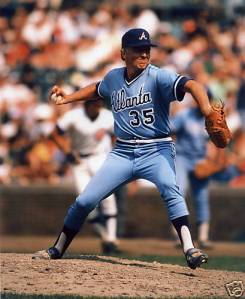 Still in his rookie season, and on the road to take on the Los Angeles Dodgers, Palmer took the mound with the entire baseball world watching.

And this kid delivered one of the greatest pitching performances in World Series history.  And he was the youngest player on the field.

Palmer pitched a masterpiece.  Going the distance, Palmer and his Orioles teammates won the game 6-0.  He threw a complete game shutout while allowing just 4 hits and striking out 6 batters.  A legendary performance by a calm, cool-mannered kid!!!

Now that my Orel Hershiser player collection is complete I wanted to take the time to show off my favorite 5 cards from this set.

The vantage point that this card offers us is priceless.  Let me correct myself, it is not priceless, it is very expensive actually.  The only people who get to see Orel Hershiser from this angel are the hitters, the catchers, and the umpires.  And then the guys that can afford seats right behind home plate too – the wealthy!

Donruss hit us with a Maroon border for their 1987 ‘Opening Day’ set.  And I have to admit that I wouldn’t agree ‘on paper’ to liking Maroon as a border color, but for this card, it actually looks pretty good.