Undoubtedly, both Johnny Bench and Joe Morgan are two of the greatest baseball players from their era.

Undoubtedly, both deserve to rest in the Hall of Fame among the greatest to ever play the game.

Johnny Bench was elected to the Hall of Fame in 1989.  He gained entry on his first ballot collecting 431 of 447 votes cast. 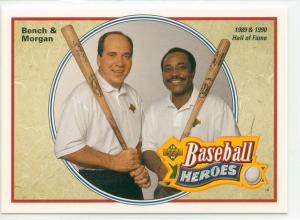 ‘The Big Red Machine’ was dynamic during their run as one of the sport’s greatest dynasties.

And had it not been for the immense talents that Johnny Bench and Joe Morgan brought to those teams, they may have done well, but they would not have conquered baseball the way that they did.

The Reds won World Series titles in 1975 & 1976.  And in the years that Bench and Morgan were teammates, 1972-79, they appeared in 3 World Series match-ups while also losing two other times in the NLCS. 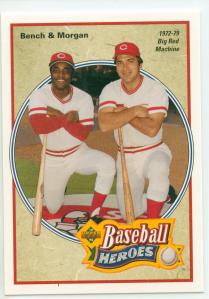 The sixth card of this set recognizes Morgan’s ability to lead by example both on and off the field.  Past his prime, and moving around from team to team, Morgan played for 4 different teams during the final 5 years of his big league career.

Still wanting to excel as a baseball player – Morgan continued to contribute for his club.  In 1980, he helped the Astros win their first division title.  in 1982, he won the comeback player of the year award with the Giants.  And in ’83, Morgan helped lead the Phillies to the NL pennant!!! 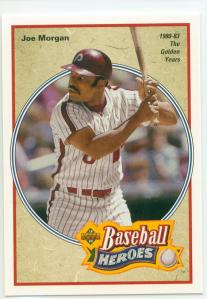 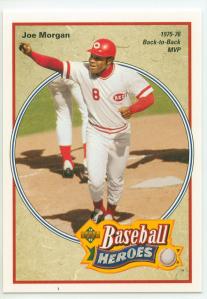 The fourth card of this set introduces Joe Morgan and his phenomenal debut with the Houston Colt .45s in 1965.

Morgan finished second in the Rookie of the Year race in 1965 to Jim Lefevbre. 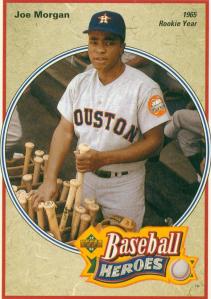 In 1970, Bench’s offensive game took off.  He was hitting the ball well, and was slugging home runs on par with the game’s most powerful hitters.  Bench hit .293 in 1970 while collecting 177 hits.  Of his 177 hits, he crushed 35 doubles and 45 homers.  he was responsible for driving in 148 runs for the Reds that year while also scoring 97 times. 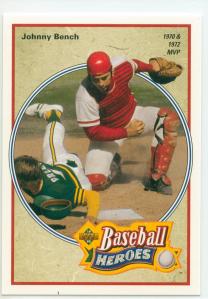 A supreme defender, this card honors the 10 consecutive Gold Glove awards that Johnny Bench earned between the 1968-1977 seasons.

I always say that in order to be named as an elite player, a player must have been considered the best in the game at some time during his career.  And for Bench, he was that for 10 straight years.

It takes a lot to be a great catcher.  But to be the best catcher for a decade is incredible!!! 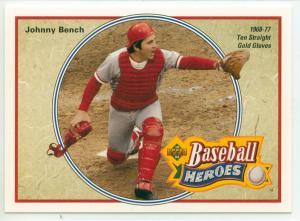 The first card of this set honors Bench’s rookie season of 1968 – a year in which he became a household name across the country.

Bench was stellar in his debyt with the Reds during the 1968 baseball season.  Impressive from day one, Bench collected 155 hits during that season, while posting a .275 batting average.  He also hit 40 doubles and 15 home runs while driving in 82 runs and scoring 67 times.

Bench received a ton of accolades for his hard play that year – a spot on the NL All-Star team, a Gold Glove award, and the Rookie of the Year too!!! 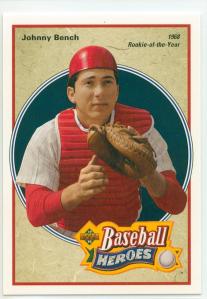 As I continue to find ways to pay tribute to ‘The Big Red Machine’, I found this little 9-card beauty on Ebay last week.  And it only cost me $3.00 to bring it home!!!

Issued by Upper Deck in 1992, this set honoring both Johnny Bench and Joe Morgan is part of UD’s Baseball Heroes insert set that they were issuing in the early 1990’s to honor some of the sport’s greatest stars.

I am thrilled to own this set, and I will be showing off each and every card of this 9-card doozie throughout the day today!!! 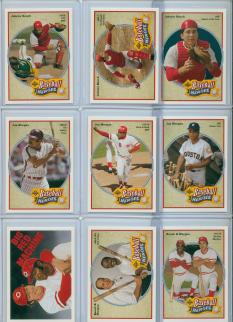