Ah, the final card of the set!

And what a tribute it is…

A glorious piece of artwork that showcases Reggie and his amazing career – from beginning to end.

And I love how the artist displayed all four caps that Reggie wore during his 21 seasons as a major league player!!!

Reggie’s final season was played back in Oakland – where his big league career started.

Reggie was honored by his former team over the course of the season, and his final season in the majors was a grand send-off.

At the age of 41, Reggie added 15 more home runs and another 43 RBI to his extremely impressive resume!!

This card pays tribute to Reggie’s climb up the All-Time Home Run ladder!!

With home runs soaring at a record pace, Reggie was quickly among the sport’s greatest and most prolific sluggers.  And with 7 seasons of 30+ home runs under his belt, Reggie quickly elevated himself close to the top of the list.

Reggie retired with 563 home runs.  At the time of his retirement, Reggie ranked in 6th place.  He currently ranks at 13th.

This card pays tribute to the 500th Home Run of Reggie Jackson’s career.

One of the most impressive players in the game joined the 500 Home Run Club in front of 28,862 fans at Anaheim Stadium in California.  As a member of the Angels, Jackson and his teammates took on the first place Kansas City Royals.

In the bottom of the 7th inning with his team trailing 7-0, Reggie Jackson crushed a Bud Black pitch into the outfield stands for a home run – #500!!!

Reggie Jackson currently ranks at 13th All-time with 563 career home runs.  And although that ranking will fall a few notches over the next few years, Reggie Jackson will always be remembered as being one of the greatest home run hitters of All-time!! 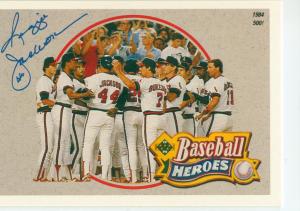 Reggie went back to California in 1982, this time spending time playing for the California Angels.

In total, Reggie played 5 seasons with the team – and he put up some monster numbers in the process…

Now this card, this card here puts special emphasis on Reggie’s performance during the 1978 World Series.

Why would Upper Deck honor that series with a card?  Let’s check out how Reggie did against the Dodgers…

Reggie Jackson is truly an immortal baseball player.  There will never be another like him again.

The second card of this set highlights Reggie’s 1973 baseball season – a campaign in which he was crowned as the AL MVP.

This first card from this set features a very young-looking, and very slender, Reggie Jackson.

Reggie was a 4-sport superstar in high school.  His best sport was football, and he ended up with a scholarship to play football at Arizona State University.  While there, he was recognized as a true baseball talent and his immense skill earned him the second selection in the 1966 baseball draft.

In just his second season in the big leagues, and at the young age of just 22, Reggie’s career as a slugger began.  He crushed 29 home runs that year while collecting 74 RBI.  He finished in 17th place for the AL MVP award.

I picked this set up some time ago.  But I wanted to wait to show it off until October – when Reggie Jackson cemented his legacy as one of the sport’s greatest stars.

So that is my plan.  All day long I will be unveiling the cards of this set for you to enjoy.

Sit back and relax – and take in one of baseball’s biggest stars, Mr. Reggie Jackson!!!! 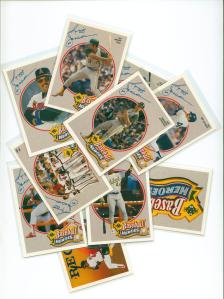