Ah, the final card of the set!

And what a tribute it is…

A glorious piece of artwork that showcases Reggie and his amazing career – from beginning to end.

And I love how the artist displayed all four caps that Reggie wore during his 21 seasons as a major league player!!! 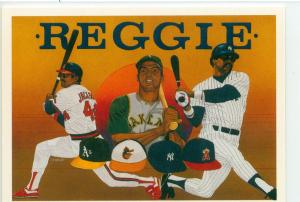