Tony Perez was one of the most important and steady parts of ‘The Big Red Machine’.

Playing in Cincinnati for 16 of his 23 big league years, Perez was and still is regarded as one of the team’s greatest players of all-time.

A skilled defender, Perez was primarily used as a first baseman, although he did log over 700 games at third base as well.

Tony Perez is a 7-time All-star.  He finished in the Top 20 for the MVP award 6 times.  Perez was inducted into the Baseball Hall of Fame in 2000.

Perez starred for both Reds teams that went on to win the 1975 and 1976 World Series championships!!!

My take – The fact that  he has accomplished that feat in each of his first 10 major league seasons is even more remarkable!!

Vincent Edward Jackson was one of the most exciting players to debut in major league baseball during the 1980’s.  A 2-sport athlete that built a strong following at the University of Auburn, Jackson was a star before he made his professional debut.

And although his career was cut short due to a football injury sustained while playing in the NFL, Bo Jackson offered us some incredible highlights while in the big leagues.  An All-star during the 1989 season, Bo was wildly popular for his ability to crush home runs(141 in 8 seasons), chase down everything in the outfield, and his breaking of bats.

Happy Birthday Bo!!!  And thanks for the memories that will last a lifetime!!! 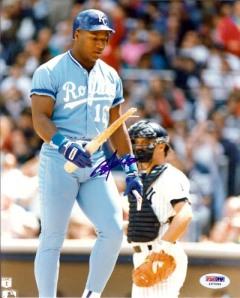 On this day in 1961, Billy Williams was awarded with the Rookie of the Year award in the National League.

In that ’61 campaign, Williams starred in 146 games for the Chicago Cubs.  And once he earned that starting job in left field, he kept it for fourteen years!!!

During his ROY season, Williams hit .278 while collecting 147 hits.  In a display of his all-around offensive skills, ‘Sweet Swinging Billy Williams’ connected for 20 doubles and 25 home runs.  He also scored 75 runs while driving in 86.  And amazingly, as a 23-year old rookie, he only struck out 70 times in 584 plate appearances.

The Baseball’s Best sets that Donruss released between the 1988, 89, and 90 baseball seasons were very nice additional sets for the team and player collectors to go after.  The 1989 issue was pretty bland in comparison to the 1988 and 1990 releases.

This card, from the 1990 issue, certainly is bold.  But just like the one issued in 1988, the strong colors work well with certain team color schemes.  And this bright Blue doesn’t look bad at all when put with Molitor’s Brewers uniform.

Ozzie Smith was an All-Star 15 times during his major league career.

Headline – Kevin Steals 21 Without Being Caught!

The Story – St. Louis, MO.  October 2, 1988:  Mets’ Kevin McReynolds has set a major league record of 21 stolen bases with no caught stealing in 1988.  The former mark of 15 steals in as many tries was established by A’s Jimmy Sexton during 1982 campaign.