Let’s be real here.  While I like Alfonso Soriano, even more before his Cubs’ years, the real reason that I picked up this card was to add another relic card of Andre Dawson to my collection.

And if the card has to feature another player, I can think of quite a bunch of guys I would rather not have as opposed to Mr. Soriano. 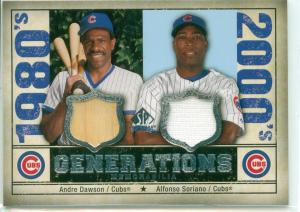 From Upper Deck SP’s 2008 ‘Generations’ set, tis card is very sharp-looking in person.  Boasting clear photos, and great color, this dual relic card is a wonderful addition to my collection!!

I have told you more times than you probably care to hear it, but I love this set.

And still, each time that I grab a card from it and add it to my player collections, I always wonder if another border color would look better than the one that Score used for said card.

And for this one, that answer is ‘Yes’!

You see it below in Red, now imagine it in Mets’ Orange!!!

On this day in 1977, Eddie Murray was awarded the Rookie of the Year award.

Taking the league by storm in 1977, it was no surprise when Murray walked away with the top prize of his rookie class.

Jumping right into the starting line-up, and competing in 160 games, ‘Steady Eddie’ was impressive from the get-go.

Putting up numbers that mirrored the veterans on his team, Eddie hit .283 as he collected 173 hits.  Of his 173 hits, 29 were doubles with another 27 being home runs.  Murray was also responsible for driving in 88 runs during that rookie campaign, and he scored an additional 81.

Of the 27 first place votes cast for the Rookie of the Year, Murray captured 12.

At the age of 41, and with 22 big league seasons under his belt, Griffey is one of the most accomplished players that the sport has ever seen.  A ‘5-tool player’ that was able to dominate the game in a vast number of ways, the man they called ‘Junior’ was a superstar in the sport through 4 straight decades.

His resume is impressive.  His smile is contagious.  His swing is legendary – Ken Griffey Junior will be impossible to replace!!!