Bret Saberhagen, Mike Witt, and Jack Morris are three of the most dominant starting pitchers in the American League.  Each is the ace of his team’s pitching staff and all three were selected to the 1987 American League All-Star team.

After a disappointing 1986 season, Saberhagen reverted to his outstanding rookie form.  He won 18 games and hurled four shutouts.  He enjoyed a particularly impressive first half of the season, winning 15 games by mid-season.  He was the American League’s starting pitcher in the All-Star game.

In 1987 Morris anchored the American League East Champion Detroit Tiger pitching staff.  He won 18 games and registered 208 strikeouts.  He has won more games in this decade than any pitcher in major league history. 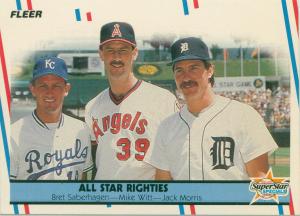