Any player wearing the color Red that is featured in this 2001 Fleer ‘Greats Of The Game’ set looks fantastic.

For some reason, maybe the clean and White space that occupies most of the card, the Red jumps off of the cardboard.

The picture of Johnny Bench used on this card looks very nice as well.  And I like the shadow-effect that Fleer used – it gives the card depth.

And now that I have this card in my collection, I am very curious to see the original photo.  I wonder if it is as interesting as the edited version used here…  Hmmm.

In a rare, quiet moment the photographer yells, ‘Hey Carter’!!!

And this is the result:

It is pretty odd to now see Gary Carter smiling from ear-to-ear when photographed.

In 1987 the Phillies’ Steve Bedrosian and the Reds’ John Franco each enjoyed the best season of their careers.  Both were the ‘stoppers’ of their team’s pitching staffs, and both produced remarkable streaks which highlighted their season.

Bedorsian was the major league leader with 40 saves.  He also had five victories, which means that he had a hand in 45 of the Phillies’ 80 victories.  Between May 10 and July 18 Steve recorded 25 saves in 29 games.  Within that period he notched a save in 13-straight appearances, setting a major league record.  Steve struck out 74 batters for the season, while walking only 24.  He also finished the season with an impressive 2.83 ERA and the Cy Young Award.

Franco had 32 saves, eight victories, and a 2.52 ERA.  He did not allow an earned run in his first 13 appearances of the season.  During that stretch, he pitched 13.2 innings, allowing only three hits, fanning eight, and registering one victory along with eight saves.  John also ended the season in fine style – he earned a save in each of his last five appearances. 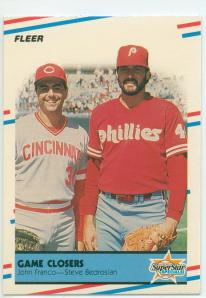