Gotta love those modern issues to pay tribute to the cards that feature the greatest players in the game’s history.

I have the original – issued more than 44 years ago, and now I have a pretty sweet card to set next to it!!

Ozzie Smith does not get the credit he deserves for being one of the great base runners of his era.  Part of that is due to playing during the same time as Rickey Henderson and another part is due to being teammates with both Vince Coleman and Willie McGee.

Ozzie played in the majors for 19 seasons.  And during that time, he scored 60 or more runs 14 times.  He also stole 25 or more bases 14 times.  Pretty solid stuff from a player who is thought of as a defender first…

If I could use 1 word to describe Ron Cey’s baseball abilities it would be = SOLID.  This guy appears to have had no weakness!!!

In his 17-season career, Cey established himself as a good hitter for average and power with the ability to drive in runs.  I think that one of the greatest factors of this was that Cey played with the same players for half of his career.  As a member of the LA Dodgers in the 1970’s Cey was on an infield line-up that played together for 8 straight seasons.  By the end, they were a well-oiled offensive and defensive powerhouse and ended up winning the World Series in 1981 while Cey took home the Series MVP Award.

A real friend of the fans, Mr. Cey has signed tons of autographs for his fans in lightning quick time.  In the past year alone, he has signed for me three times.  And each time, he delivers a beautiful signature and usually in less than 10 days time!! 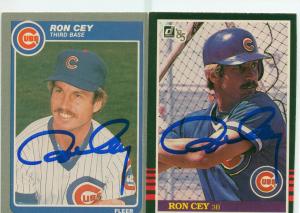