I know, I know.  I told you all months ago that I was going to make my blog a Sosa-free one.  And I tried – trust me.

But then I saw this:

And while I may have been conflicted for a second or two, I quickly snapped out of my Sosa-induced state and realized that good beats evil, and Dawson reigns supreme!!

Pete Rose Is Out. Dick Butkus Is In!!!

After a seven-year run, Pete Rose is switching teams again.

Major League Baseball’s all-time hits leader, but an outcast for his many scandals, Rose has left the Field of Dreams memorabilia store at the Forum Shops at Caesars for what he hopes will be greener pastures.

“It was a mutual thing. He wanted to try something different. He’s a deal maker,” said Jim Nagourney, vice president of Stars Live, a division of Field of Dreams.

Rose, rumored to be heading for Luxor, turned his firebrand style and controversies into a $1 million-a-year business for most of his seven years at Field of Dreams.

Nagourney said NFL Hall of Fame linebacker Dick Butkus has been filling in for Rose, and the hope is he will move into the 15-weeks-a-year schedule Rose had.

Rose, who turns 70 on April 14, left “on good terms,” Nagourney said. “It was an enormous success” for both parties. Pete’s a friend of everybody in our company.”

Butkus, an eight-time Pro Bowl selection who played with the Chicago Bears from 1965 to 1973, got off to “a dynamite start,” Nagourney said. “He’s extraordinary with the public; really cares.”

Fleer’s Ultra brand was at one time ‘The Best Of The Best’.  Their attention to details like heavier cardstock and shinier finish put their product into a different category as compared to other issues within their brand as well as the competition’s.

But, unable to offer perfection with each design that they created, I have to say that this All-Star card issued in 1992 of Boston’s Wade Boggs is pretty poor.

I will admit that I love the photo used of the batting champion, as it shows him in the midst of watching a ball soar off of his bat.  But that horrible Black border takes so much away from what looks like a great picture. 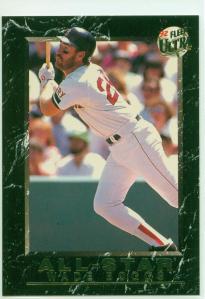 Spanning 16 seasons and 7 teams, Gant established himself as a multi-faceted player that was able to do it all from an offensive standpoint.  A career .256 hitter, Gant managed to surpass the .300 mark one time during his playing days – in 1990 when he hit .303.  He was also a mighty slugger as he collected 321 home runs, with a career high of 36 dingers coming in 1993.  Gant was fast on his feet as well.  He swiped 243 bases in 16 seasons, with his career best 34 steals coming in 1991.

Ron Gant was a 2-time All-Star, a 2-time Top 6 contender for the MVP award, and the winner of the 1991 Silver Slugger Award in the National League.

Gant made the post-season on six different occasions, making trips to the World Series twice but losing both. 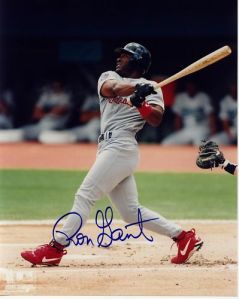 Terry Steinbach was the anchor for a very successful Oakland Athletics pitching staff during their ‘Glory Years’ of the late 1980’s.

A 3-time All-star catcher, Steinbach was the model of consistency both at the plate and on the field for what at the time was baseball’s most dynamic line-up.  During Steinbach’s 14-year career, he hit a solid .271 while amassing 162 home runs and driving in 745 runs.  On a line-up that consisted of the amazing talents of Rickey Henderson, Jose Canseco, Mark McGwire, Carney Lansford, Dave Henderson, and others, it was Steinbach’s approach at the plate that helped the A’s become the elite team of the 1980’s.

In Steinbach’s first year of Hall of Fame eligibility in 2000 he received 1 vote and was dropped from all future ballots.

TEMPE, Ariz. (AP)—Garret Anderson(notes) is retiring after 17 seasons in baseball, almost all of them with the Angels.

The 38-year-old left fielder says he has no regrets and hasn’t ruled out a coaching career.

“It is with mixed emotions that I have decided to retire from baseball,” Anderson said Tuesday in an Angels’ news release. “It was truly a privilege to play this wonderful game and for that I want to thank several individuals.”

Anderson thanked owners the Autry family, Disney, and Mr. and Mrs. Arte Moreno along with “all the managers and coaches, both in the minor and big leagues, and players that had a hand in my success.”

Anderson said he had offers from teams this spring, but would have had to sign a minor league contract.

“I could never be in a position hoping a player gets hurt,” Anderson said.

He spent the first 15 years of his career with the Angels, before playing for Atlanta in 2009 and the Dodgers last season.

“Garret was an incredible player, one with a calm demeanor and quiet confidence that allowed him to excel in this game,” Angels manger Mike Scioscia said. “He had a tremendous passion to play this game and a deep understanding of how to play to win and that was very important to this organization.” 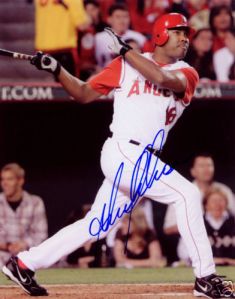