When I bought my handful of 2011 Topps packs, I pulled the card below.  And while I have no idea if it is a valuable card or not, I don’t really care either.  It’s just cool because it’s Jackie!!

So, if anyone wants it, just ask and it’s yours!! 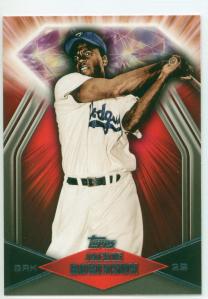 Charley Knows Bo!!! And Ernie Too…

Charley Knows Bo!!!  And Ernie Too…

Charley did it again.  Without fail, each and every time that I announce a new group of players that I plan on collecting, he sends cards.  And it is never just 1 card – it’s always a nice assortment.  And they always match perfectly with my collecting habits!

This time around, Charley hooked me up with Bo Jackson baseball cards – 6 new ones for the collection.  Here they are: 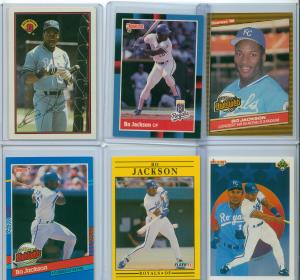 And he also offered up the two treats you see below.  Very cool cards, I had never seen them before, but any time you can add a card of Ernie Banks or Harmon Killebrew into your collection, it is a good day! 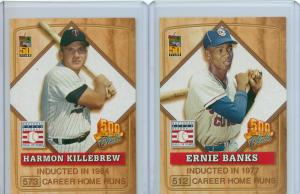 Thank you so much, Charley!  I truly appreciate it!

While photographed in his Cubs’ jersey, Dennis Eckersley spent the entire baseball season in 1987 with the Oakland Athletics.

And while checking out Eck’s stats from his debut season with the A’s, the stat that leaps out at me the most is 8.8.  8.8 represents his strikeout:walk ratio – a very impressive number as Eck struck out nearly one batter every inning pitched while walking just one in the same allotted time.  In total, he struck out 113 batters while walking 17, 3 of which were intentional. 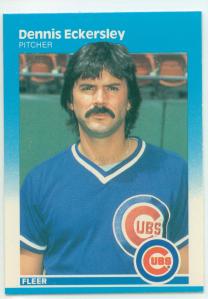 Vladimir Guerrero holds the Montreal Expos records for home runs hit in a single season.  In 2000, Guerrero hit 44 home runs.  He also owns the second place spot on that list with the 42 round-trippers he hit in 1999. 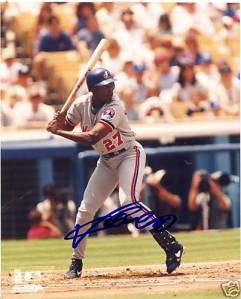 Frank Viola didn’t take baseball by storm the way some other pitchers did during their first season in the majors.  Drafted out of college in 1981, Viola debuted with the Minnesota Twins in  the middle of the 1982 season and the next year and a half were a learning process for both him and the Twins team.

In 1987, Viola helped the Twins win the World Series and he earned the World Series MVP Award for his outstanding pitching performance.  Viola started 3 games against the Cardinals and went 2-1.  He displayed amazing control in a pressure filled series as he only allowed 3 walks in 19+ innings, while striking out 16.

After 8 seasons with the Twins, Viola spent the last 7 years of his career playing for the New York Mets, Boston Red Sox, Cincinnati Reds, and lastly the Toronto Blue Jays.

With a career record of 176-150, Viola’s record does not stand out as an above average pitcher.  But, when you examine the kinds of teams he played for and their success you begin to see how valuable his efforts were as most of these teams had losing records.  With 4 Top 6 Cy Young award finishes, and 1 win of the award, Viola should go down as one of the most consistent pitchers of the 1980’s. 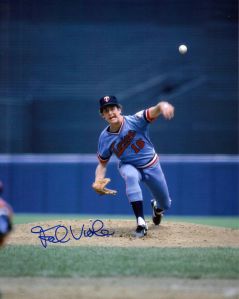