It’s time for another contest at ’30-Year Old Cardboard’.  And this time around, we are going to honor the sluggers.

And now onto the prize…  The winner of this contest will win their choice of any TWO of the below Game-Used relic cards.  And all of these guys were solid sluggers… 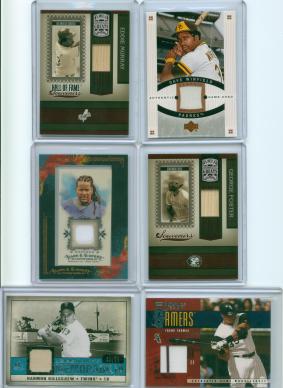 So, what is your lucky number going to be?  Submit your pick into the comments section of this post and you’re in.

All picks need to be submit by Saturday at midnight.  And once a number is taken, you cannot select it again so choose wisely and choose early.

Good Luck Everyone!!!  Enjoy the games!!!

Very few cards need little to accompany them when being shown off.

This may be one of the cards that qualifies.

All of my feelings about this card can be summed up into one very appropriate word:  SUPERB.

The 1969 baseball season was supposed to be the year that the Chicago Cubs won it all.  The city, the team, the fans, and the sport believed that 1969 was the year that it was going to happen.

Well, we all know how that ended – and I don’t have the energy to get into that right now.

Instead, I will show off the latest and one of the greatest additions to my Ron Santo collection – his 1969 Topps base card.

1990 marked the 5th consecutive All-Star appearance for Kirby Puckett.  As one of the game’s best outfielders, Puckett deserved to be a fixture at the mid-summer classic on an annual basis.

And a very nicely designed All-Star card to commemorate the event!

Hornsby’s major league career began in 1915 at the tender age of nineteen.  A staple in the St. Louis Cardinals’ line-up for more than a decade, Hornsby had offense down to a science as he quickly became the best hitter in the sport.  He From 1920 to 1925, his average never dipped below .370 while peaking at .424 – while racking up six batting titles in the process.

After his tenure in St.Louis, Hornsby moved on to New York, Boston, Chicago, and eventually back to St. Louis.  And during that journey, the hits kept coming…

By the end of his 23 seasons, Hornsby had amassed 2,930 career hits.  His lifetime batting average of .358 ranks as the second highest in major league history behind Ty Cobb.  In total, he collected seven batting titles and two MVP awards as well.

Happy Birthday Mr. Hornsby.  Your impact on the game is not forgotten!!!

SAN DIEGO — When Chipper Jones learned to be a switch-hitter at a young age, his father told him all about Yankees legend Mickey Mantle. Nearly 30 years later, Jones can tell his kids about how he surpassed some of the great numbers produced by Mantle.

With his first-inning two-run home run off Aaron Harang in Tuesday night’s 8-2 win over the Padres, Jones increased his career RBI total to 1,509, matching the total Mantle recorded during his Hall of Fame career. Hall of Famer Eddie Murray is the only switch-hitter in Major League history with more RBIs than Jones and Mantle with 1,917.

Jones has notched a number of milestones during the first month of this season. He recorded his 2,500th hit on April 8 and his 1,500th RBI on April 12. In doing so, he joined Murray as the only switch-hitters to ever record 2,500 hits and 1,500 RBIs in a career.

“We grew up hearing about Mickey Mantle and now we’re witnessing Chipper Jones getting those milestones,” Braves manager Fredi Gonzalez said. “It really does give me goose bumps every time one of those milestones is reached.” 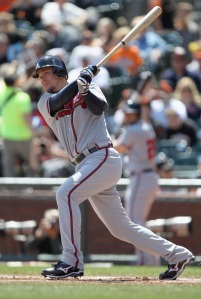