I have wanted this card since the first time that I saw it hit the Internet a few months ago. 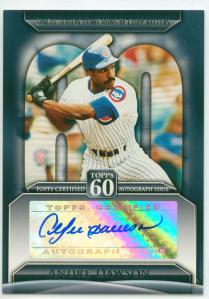 So Sweet!!!  A fantastic addition to my rapidly growing Certified Autograph collection of ‘The Hawk’.  This card is #24!!!

Taking a crack at the 1970 Topps base card design, this card was issued of Ozzie Smith as part of Topps’ Vintage Legends set.

And man, does this card bring back memories of a more free time in baseball.

Just look at Ozzie and his uniform….  The afro, the San Diego Padres cap, and check out his pants!

I’d been looking for a unique card to send to Mr. Doerr to get signed.  Ever since I got back into the TTM game, I have received 4 or 5 beautifully signed pieces from him, but it seems like every time I post a successful return on ’30-YOC’ my Inbox is inundated with questions as to how Doerr’s autograph was so easily obtained.  Usually I offer up the signed card – and now I am left with just one in my collection.

I am thinking that I may try sending a Sharpie along with the card this time.  But not just any Sharpie.  How do you think Red would look on this card?  I don’t know, but the color Red is calling is to me when I look at this one.

You know what comes next…

Certainly not the best baseball card of either of these big-leaguers…   I have to guess that they had fun during the photo shoot though!! 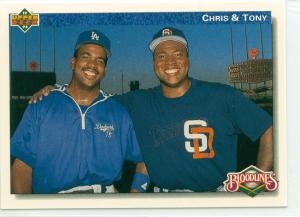 Tony Fernandez, Cal Ripken Jr, and Alan Trammell are three shortstops that can be considered superstars.  In 1987 all three enjoyed outstanding seasons which measured up to their precedent-setting seasons of the past.

Fernandez rapped 186 hits and batted .322.  Both figures were 7th best in the American League.  He also scored 90 runs, hit 29 doubles, eight triples, and stole a career high 27 bases.  Tony is a Gold Glove winner and this year he led all American League shortstops in putouts.

Ripken, baseball’s Iron-Man, again played in all 162 games, and again produced the type of numbers that baseball fans have come to expect from him.  He hit 27 home runs, had 98 RBI’s, and scored 97 runs.  He was the starting shortstop in the All-Star game, his fifth consecutive selection to the AL squad.

And for his great, and very educated guess, he now gets to choose any two of these Game-Used jersey cards:

And thanks to everyone that participated in my ‘Home Run Derby’ contest.

The next contest is just a few weeks away – three actually.  I’ll be doing something fun during baseball’s inter-league weekend.