Well, his stats may not have been in the top 99th percentile, but Bo Jackson was coming into his own by just his second full season in the big leagues.

Blessed with immense power and blinding speed, Bo was the kind of player that you wanted to see when he came to the ballpark to do battle against your ‘home team’.

In 1988, 1989, and 1990, Donruss issued their ‘Baseball’s Best’ subset.  Rather large for a subset, the set included more than 400 cards of the best players in the sport.  And for collectors like me, it gave us opportunities to add another card to our player collections which is always a good thing. 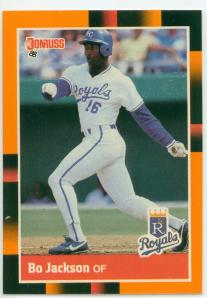 While the bright Orange border doesn’t really help the overall look of this card, it does make the large picture of Bo stand out.

A nice addition to my Bo Jackson collection!!