One night after collecting two hits in a Yankees’ win against the Indians, Dere Jeter inched one step closer to baseball history ba capturing hit number 2,997 of his career.

In the eighth inning of Wednesday night’s game, Jeter connected for a double, his lone hit of the game.  Jeter was 1-for-3 on the night, as the Yankees lost the game 5-3. 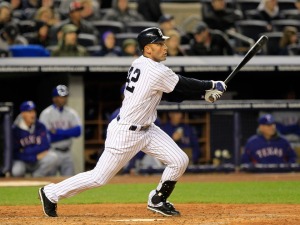