Frank Robinson was elected into the National Baseball Hall of Fame in 1982.  The headliner of that class, Robinson collected 370 of the 415 votes cast by the writers.

And while I have not been able to find a transcript of his speech, I have to guess that it was pretty empowering.

As for Robinson’s Hall of Fame plaque, it reads:

Frank Robinson Offers A Unique Twist To His Autograph

Frank Robinson Offers A Unique Twist To His Autograph

But it also stands out for another reason – the flare provided by Robinson.

I’m not talking about extra squiggles or over-emphasized characters.  What I am talking about it how Robinson lays down his signature on a baseball. 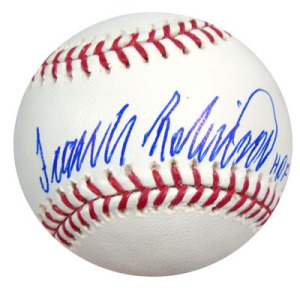 See how he follows the stitching of the ball?  Pretty neat, and very unique.

After being considered as a managerial candidate for several years, Robinson was finally given the chance to manage a squad in 1975.

In total, Robinson managed four different teams over a 16-year span.  Compiling a win-loss record of 1,065-1,176, Robinson was hardly put in a place to win.  The teams he managed?  The Indians, Giants, Orioles, and Nationals – not actually threats to any pennants…

In 21 baseball seasons, Frank Robinson played in 5 World Series match-ups.  That is not a bad clip, if you ask me…

And in those 5 trips to the Fall Classic, Robinson helped his squad win two World Series titles.

As for Frank, he played in a total of 26 World Series games.  Compiling just a .250 batting average, Robinson was able to deliver production with his eight home runs, 14 RBI, and 19 runs scored.

On September 13, 1971, Frank Robinson connected for the 500th home run of his amazing baseball career!!!

At home and sitting in first place in the American League East division, the Orioles were hosting the Detroit Tigers.  Robinson entered the game with 499 home runs on his resume and was looking to make history in front of the fans at Memorial Stadium.

He made the faithful Oriole fans wait until the bottom of the 9th inning, but he crushed a 2-run homer for #500.  The shot came off of Tigers pitcher Fred Scherman and the crowd erupted in applause for Robinson even though his team trailed the Tigers by 5 runs and eventually lost the game by a score of 10-5.

I enjoy watching a player chase a milestone that will help solidify their career.  Most recently, it was Derek Jeter.

But with Frank Robinson’s career, I wonder if there was an official ‘count down to 3,000’.

Robinson joins a long list of baseball legends that just fell short of reaching a specific baseball milestone.  Still, it does very little to tarnish his tremendous career.

Frank Robinson And ‘The Triple Crown’

Frank Robinson And ‘The Triple Crown’

Frank Robinson Is A 12-Time All-Star

Frank Robinson Is A 12-Time All-Star

When you consider that Frank Robinson played during an era that featured some of the greatest outfielders in the history of the game, it is an amazing feat that he made the All-Star team twelve times.

It’s a true compliment too!!

I am not sure how the voting for the Gold Glove Award was handled back during Robinson’s era, but for today’s game, there seems to be quiet a bit of political play occurring.

For the most part, today the award is hardly given to the league’s best defenders.  Instead, it seems like the award is used to keep stars in the spotlight.

Frank Robinson won his only Gold Glove Award in 1958.  In 138 games that year, Robinson spent time in left field, center field, and even third base.  In total, he committed just five errors while amassing a fielding percentage of .991.

The other two National League winners from the outfield in 1958?  Hank Aaron & Willie Mays.  Solid company right there!!!