You can call this one the money card if you want to.  The truth of the matter is that I spent 75% of the money that I did fork over on this one baseball card.

Luckily, it is in excellent condition and it features one of my favorite pitchers of all-time – Mr. Bob Gibson. 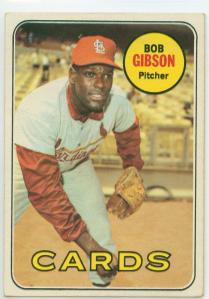 True Story – After forking over payment for this baseball card, the dealer lifts both of his arms in triumph and announces rather loudly that he has ‘Made My First Sale Of The Day’.  And while I would consider this behavior to be odd, what is more odd is that I bought this card right before leaving, at 1:15PM.  The show opened at 10:00AM…

One of the more common theme among the dealers at this show was the availability of bins of autographed and game-used cards.  And most were dirt cheap.

But most were also of players that nobody would desire (probably why the boxes were very full).

I like to sift through them anyways, always looking for Hall of Famers.

And this time around, I found one.  And it is a beauty!!!

Issued in 2001 by Bowman, the card is miniature in size and features a very large hunk of wood that came from a stadium seat at the old Cleveland Municipal Stadium.  That stadium has seen a lot of baseball magic take place, and it is very cool to have a card that acknowledges that.

And the fact that Bob Feller was chosen to be on card is just icing on the cake!!!   We miss you, Mr. Feller!

I’ve had Reggie on the brain quite a bit.  For starters, I am roughly 2/3 of the way done with reading a book about him and his legendary career.  And on top of that, with October around the corner, I have a lot of Reggie Jackson things I am putting together for the blog.

This card was found in the same bin as the Lou Brock one.  It is Reggie’s base card from the 1980 Topps set and it features an image that has perfectly captured the backswing of one of the greatest sluggers and World Series heroes in baseball’s history. 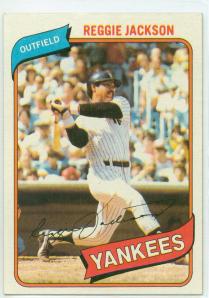 I hunt for vintage baseball cards.  And on the happy occasion that I find some to sort through, I try to nab on the good ones as quickly as I can.

This one, from the 1978 Topps baseball card set, features Cardinals’ great, Lou Brock.

And while the card is far from spectacular as it relates to design or image choice, it is Lou Brock, one of the most underrated players in baseball history (my opinion). 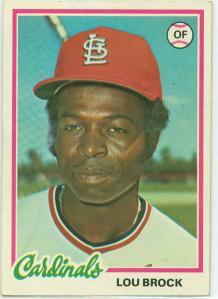 Man, I really don’t know where to start with this…  I sit here with a heavy heart as the beloved baseball card show, one that I cherished as a kid and crave as an adult, is just a memory.  A distant one at that.

With all of the hype surrounding this show, I approached it with a great amount of excitement.  Between the website, print ads, and radio spots, I was classifying this one as a ‘mini’ convention of sorts.  And the addition of the sponsorship of the Hard Rock mixed with the player appearances that were scheduled, I had my sights set on the best show I would have attended in the last twenty years.

I cannot classify the show as false advertising, so I have to instead classify my thoughts as false hope.  Friends, I am very concerned about our hobby.

When I walked into the show, I was greeted by silence.  No noise at all, no line at the admission table, and no customers at the first five tables that I walked by…

And from there it got worse.

In total, probably 25 dealers, half of which did not sell baseball cards – figurines, photos, and jerseys littered their tables.  Of the card tables that were there, I found no ‘bargain bins’ worth spending any time at.  And while I was still able to find cards that appealed to my kind of collecting, they were not in the price range that I prefer to pay.

Throughout the day, I will show them off to you as that is my normal routine after attending a card show.  And while I wish that there was more for me to show off, I am very happy with the four cards that I did purchase.

As a collector that still loves to find ‘new’ card for my collection, it looks like I will have to head back to the web to satisfy my cravings to shop for and buy cardboard.

And since I still crave the physical hunt for baseball cards of my favorite heroes, I have just two options going forward.  Option 1 is the only local card shop and option 2 is the Dania Beach baseball card show that is held monthly.  Both options become instantly more appealing to me – and the promoter of the Dania show, Lou (a very nice guy), promises that if given another chance the show will meet my expectations.

Thanks for reading everyone, the four cards I purchased will be revealed shortly.

Oh, and I did get to hang out with Alfredo for most of the time that I was there – quite possibly the highlight of my afternoon.  Thanks Fredo!!