Randy was there for all of that action with the Cubs during the 1960’s.  He starred right alongside Billy Williams, Ron Santo, Fergie Jenkins, and Ernie Banks!!

He saw it all!  And I am thrilled to add this signed baseball card to my collection!!! 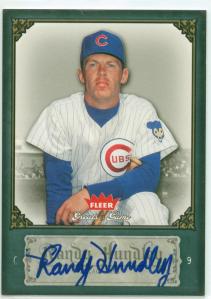 You won’t believe what I paid for this one…

One response to “Randy Hundley 2006 Fleer ‘Greats Of The Game’ Autographed Baseball Card!!”